Many patients seeking rhinoplasty have what they commonly describe as a wide, boxy, or bulbous tip of the nose. What they really want is to have it look more refined through it being narrowed. If the tip is the main nasal deformity, then it can be improved through a tip rhinoplasty.

In understanding the boxy nose, one has to understand its anatomy or anatomic derangement. In short, the problem is an enlargement or broadening of the tip of the nose. When the cartilages of the tip of the nose are enlarged, they will give the nose a boxy or broad appearance. This is especially true if the upper part of the nose is shaped well and does not need surgical alteration. When looking from below, the boxy nasal tip appears square whereas the more appealing nasal tip appears triangular. 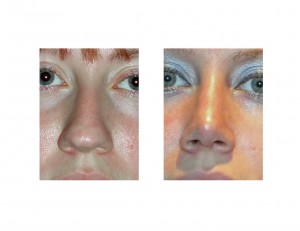 The rhinoplasty techniques to change the boxy nose are all based on manipulated the cartilages that make up the dome. In the past, these techniques have all involved reducing the size of the cartilages. Tip narrowing was historically done by thinning of the upper edge of the lower alar cartilage. Known as a ‘cephalic trim’, this maneuver is helpful but if it is overdone it can result in weak alar cartilages and collapse when breathing in. The cephalic trim today is done more conservatively to prevent creating a weak lateral alar cartilage and in recognition that it is not the most important maneuver is narrowing the tip. 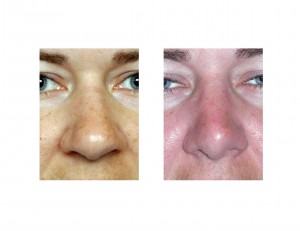 A more predictable way to narrow the shape of the tip is by using suture techniques. Drawing the tip cartilages together with sutures can change their shape. The tip cartilages can be narrowed individually, known as a single dome plication or they can be done together known as double dome plication. There are plastic surgeon advocates for either approach. The great thing about suture plication is that you can change their shape without being destructive. And they are reversible doing surgery should one not like the shape it is making. Such suture techniques can produce a dramatic change in the shape of the tip. But the patient needs to be aware of the signficance of the overlying skin. The skin poses two considerations. Does one need to do an open or a closed rhinoplasty for the boxy tip? Given the complexities of the cartilage confluences that make up the boxy tip, an open rhinoplasty will produce more consistent and complete tip shaping due to the increased exposure. Secondly, despite that the dome cartilages are newly narrowed, a thick skin covering may help obscure some of that benefit. The swelling that occurs in thick skin can help maintain some of the boxy shape for some time after surgery. While swelling does eventually go away, it may take much longer than an anxious patient would prefer. In my Indianapolis plastic surgery practice, I advise patients to wait a minimum of three and more ideally six months before judging the final result.

The boxy tip can be dramatically changed by modern rhinoplasty surgery. Since the tip of the nose is the most variably shaped element of the nose amongst different people, changing it to a more pleasing shape can really make a big facial difference.