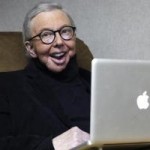 Later this week, renowned movie critic Roger Ebert is returning to television for two new debuts. One is something of which he is very familiar, a new show entitled “Ebert Presents at the Movies”.Since his original Sneak Previews show started some 35 years ago, and I remember it well as a regular viewer in my youth, his new show will be old hat even being taped where his original show was done. His second debut, however, has a more recent history.

Ebert was diagnosed with thyroid cancer in 2002 which subsequently spread to his lower jaw despite the cancerous gland being removed. This required the front part of his lower jaw to be removed as well as to needing radiation to the cancer that surgery couldn’t. He suffered complications after this surgery that landed him back in the hospital to next get a tracheostomy tube for breathing. All of these procedures combined left him with no chin and a total loss of his voice by 2006.

This is a devastating facial deformity that plastic surgeons have seen for decades after cancer removals. Known historically as an ‘Andy Gump’ facial deformity, it poses a major reconstructive challenge which defied a really satisfactory solution until the 1990s. Prior to that time, skin and muscle from the chest (pectoralis myocutaneous flap) was brought up as a pedicled flap and wrapped around a metal bar made in the shape of the front part of the lower jaw. While this was often successful, it left patients with far from a really satisfactory reconstruction. That all changed with the development and refinement of microvascular tissue transfer. Such problems today are much better done with a free fibular bone and skin flap to make the front part of the upper jaw and skin for the new chin. This would usually be done at the time of the chin removal so the patient would not go through an ‘Andy Gump’ facial phase.

But having had so many complications and a long difficult course of cancer treatments, Ebert is understandably hesitant about undergoing a long and stressful operation on his body. As a result, he has opted for prosthetic reconstruction which will be debuted on his upcoming new show. 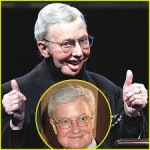 Maxillofacial prosthetics is an often unheard of field of dentistry of which its practitioners are masters of making facial prostheses of all kinds. Their abilities can rival anything seen in Hollywood. Most facial prostheses today are attached to the remaining facial bones with dental implants so they can be more reliably held in place. Presumably due to inadequate bone that has been exposed to radiation, Ebert’s new chin prosthesis will be externally supported as it will rest on his shoulders like a collar. This will enable him to have a facial appearance that, while not being normal, will be something more comfortable for the viewer to see. Because of his voice loss, a laptop computer will serve to make his voice.

While the technology to make a prosthetic chin and to have his voice emanate from a computer are modern day marvels, the real miracle is the fortitude and strength for him to press forward in a public forum with such a difficult set of facial problems. If he were a movie, I would give him two thumbs up and urge you to rush and get your ticket. You will be inspired by this script.