The introduction of CO2 lasers in the mid-1990s largely replaced the traditional of chemical peels like TCA and phenol. They initially created a deep resurfacing effect and were associated with a hypopigmentation effect in some patients and a prolonged recovery. Modern day skin resurfacing laser have gotten around these issues through the use of pulsed and scanning technology as well as the use of ‘lighter’ power sources than CO2. (Er:Yag) This Erbium technology allows for better control of the laser energy with improved results and less downtime and risk of complications.

Fractional laser resurfacing is the gold standard of facial laser treatments today. By treating just a fraction of the facial skin’s surface, recovery is very quick and the risk of complications is virtually eliminated. But it does require more laser treatments to achieve the final resurfacing result. Combining full coverage ablative resurfacing in conjunction with a fractional treatment simultaneously removes a thin layer of epithelium as well as cuts/removes small vertical columns of epithelium and dermis which leads to tissue remodeling. But recovery is often not as quick as the patient would like and multiple treatments are still needed.

Now along comes Sciton’s Hybrid Fractional laser resurfacing technology which combines an ablative fractional laser with a non-ablative fractional laser. This allows patients to get an ablative result with a non-ablative quick recovery. Known as the HALO or hybrid fractional laser, it works by delivering ablation followed by coagulation. This is done by using a 2940nm Er:YAG which delivers ablation up to 100 microns of epidermal depth with a 1470nm diode to deliver coagulation from 100 to 700 microns into the dermis. This is a novel approach being able to deliver separate treatments to the epidermis and dermis in the same treatment.

The Sciton HALO device has undergone years of testing to perfect the Hybrid Fractional Laser technology. During this testing it was discovered that patients treated with the HALO had a much better skin texture and pigment improvement than expected. These results were obtained in just one to two treatments compared with four to six treatments with older non-hybrid lasers. In addition pore size and number had unexpected improvements not seen before. 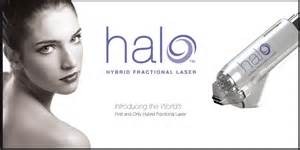 The Sciton Halo Hybrid Fractional Laser is the future of facial laser resurfacing. It produces targeted and effective improvement in the appearance of skin damage with little to no side effects. Patients prefer the HALO treatments over other forms of laser resurfacing due to the improved healing experience. The treatment is also less uncomfortable and does not require local anesthetic nerve blocks. Patients can wear makeup in just one day after treatment with a short duration of skin peeling