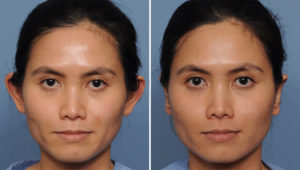 Otoplasty is a cosmetic ear reshaping procedure that has been around for over a hundred years. While there have been numerous modifications to its surgical technique, it fundamentally involves cartilage manipulation to bring the protruding ear back to a more normal angle or relationship to the side of the head.

Outside of the earlobe, the ear is composed only of skin and cartilage and its shape is a complete result of whatever the cartilage dictates. In reshaping the ear, it is important to have a clear idea of what an ideal ear shape is and what creates it. The ear is composed of numerous convexities and concavities that appear complex and random. In reality, there is a precise arrangement of the cartilage that makes a recognizeable ear. The cartilage arrangement consists of three tiers, like steps. The outer or upper tier is the helix, the second tier is the antihelical fold, and the third or inner tier is the concha. From the front view, these tiers are aligned so that each one can be seen like a series of steps. It is also important to know that the concavities of the ear do not need cartilage support unlike the convexities.

Cosmetic or shaping complications in treatment of the protruding ear is the result of how the cartilage has been manipulated whose new shape violates ear aesthetics. One of the most common complications is the ear that is set back too far. Almost always this is the result of the antihelical fold which has been bent back too far. This occurs because the horizontal mattress sutures (Mustarde sutures) have either been tied too tight or placed incorrectly. This ends up placing the outer helical rim behind the profile of the antihelical fold. This otoplasty deformity is well known given that it has a name, the telephone ear deformity. It may also occur because the concha has been sutured too tightly down to the mastoid fascia.

Similarly, undercorrection of the protruding ear can be due to inadequate placement or tying of the antihelical fold sutures. Or it can be due to the knots of these sutures which have become unraveled fairly soon after the surgery allowing the ear shape to spring back out close to its original shape. But the most common reason for otoplasty undercorrection is not recognizing the contribution of a large concha to why the ear sticks out. When one has a large ear bowl (concha) the strength of this piece of cartilage will overcome any effort to pull the ear back unless it is weakened and reshaped itself. Sometimes sewing the concha to the mastoid fascia is enough but often it must be weakened by either scoring or cartilage resection and then sutured.

Even with good cartilage reshaping, some otoplasty results are marred by the protruding earlobe which juts out from its attachment to the cartilage framework afterwards. The position of the earlobe must be recognized either before or during surgery so it can be repositioned as well. This is done by removing a fishtail-shaped piece of skin behind the earlobe so that its outer skin margin can be brought into a smooth outer helical rim line.

When the ear shape from otoplasty is not ideal, secondary revision can correct most of these deformities. Timing is of critical importance for optimal secondary correction. Overcorrections should be operated on as soon as the problem is recognized. In this way the sutures can be released before substantial scar tissue makes for a more permanent change. Once scar tissue sets in, the constricted ear can still be reshaped but it may take cartilage grafts to hold the ear back out as it heals. When very early intervention is done, the ear can be reshaped just as easily as during the initial surgery. The timing in undercorrections is not as critical as the creation of scar tissue does not prevent secondary bending and reshaping.