« Injectable Fillers – How Long Do They Last?
Ask My Cosmetic Surgeon iPhone App »

It is a common perception that our noses get bigger as we get older. I have been asked that very question many times in my Indianapolis plastic surgery practice. This perception is based on the belief that cartilage continues to grow even though our bones have long stopped growing. (in fact, our facial bones are getting smaller in size and volume as we age)

So what accounts for larger noses in older folk? Plastic surgeons feel that this is largely a phenomenon that occurs at the nasal tip. Rather than getting longer by growth, it is a function of the tip of the nose dropping or getting droopier. The lower alar cartilages, which make up the tip, or dome, of the nose lose support and begin to fall slightly. When the tip of the nose falls, it makes the nose look longer as the distance from the top of the nose (radix) to the very tip does lengthen. This, one’s nose does get longer with age but not because it is growing. 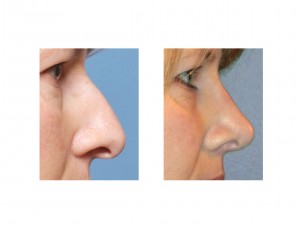 This condition is known as senile nasal tip ptosis. It can be improved or corrected by standard rhinoplasty surgery techniques. Through different rhinoplasty techniques, the tip structures can be predictably altered from just a little to a lot. (nose being shortened and rotated upward) For just a little nose tip uplift,shortening of the caudal septum and lower alar cartilage suturing can be done through a closed intranasal approach. More significant changes require an open approach where angulated caudal septal reduction, cartilage graft strengthening of the medial footplates, trimming of the cephalic margins of the lower alar cartilages, and footplate to septal suturing can be easily done.

Another nasal maneuver, although very uncommon, is a nasal skin lift. Excess skin can also cause the nasal tip to drop, particularly in thick-skinned individuals. For a minor tip lift, a horizontal ellipse of skin at the junction of the nose and forehead (glabella) can be done. This is like a facelift for the nose. Such a simple ‘rhino’ technique can be done in the office under local anesthesia. 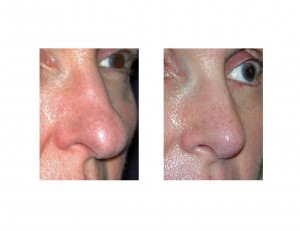 While all of these rhinoplasty maneuvers sound complicated, they are not. Nasal tip surgery is a one hour outpatient procedure than can even be performed comfortably under IV sedation or general anesthesia. All sutures are dissolveable and only flesh-colored tapes are used for the tip. There should be no facial swelling and virtually no pain. Bruising and facial swelling only occurs in more complete rhinoplasty surgery where the bones are broken and moved. This is not part of an isolated tip rhinoplasty.

One of the side benefits of a tip-lifting rhinoplasty is that many patients will breathe better. Rotating the tip upward opens up the internal nasal valve. It is like a surgical ‘cottle manuever’, a physical movement of the nostrils upward and outward which will let in more air with inspiration.

For older patient with a nose that is getting longer (sagging tip) reversing this sign of aging is a simple cartilage restructuring of the nasal tip. Some call this procedure a ‘senile or senior rhinoplasty’, I would more accurately refer to it as a ‘noselift’.