Skeletal Augmentation of the Aging Face

Aging of the face has been historically perceived as being a soft tissue problem.  This has led to how the vast majority of anti-aging facial surgery has been done, employing lifting and redraping of the soft tissues back up from whence they came. There is a reason the term ‘facelift’ has persevered for nearly one hundred years as correction of sagging has been the standard approach.

More recently, it has been acknowledged and incorporated into contemporary facial rejuvenation approaches that correction of volumetric loss is important as well. This has largely been done by fat injection grafting, spurned by the relative simplicity of the procedure and its immediate effects. But aging affects all facial structures right down to the bone. Taking a variant from a well known phrase, ‘beauty may well need to be treated all the way down to the bone’. 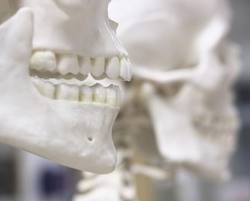 Certain bones of the face are well known to be affected by aging, marked by bone resorption. Three areas that have the strongest areas of resorption from aging are the midface around the pyriform aperture, the lateral rim of the orbit and the prejowl area of the lower jaw. Bone resorption in these areas contribute to some of the classic signs of aging with the development of jowling, cheek tissue sag and midface retrusion. These primary resorption areas as well as others will be accelerated and more severe with early loss of one’s teeth.

The periorbital area is known to resorb on the upper and lower lateral rim of bone. This causes prominence of the inner fat pocket on the lower eyelid and contributes to a tear trough deformity. Elevation of the inner brow appears due to dropping of the outer brow and lengthening of the lid-cheek junction. In essence, the loss of skeletal support causes the cheek tissues to fall causing a cascade of periorbital and cheek findings. This serves as the basis for midface/cheek lifts, cheek and submalar implants and fat injections.

Resorption of the maxilla around the base of the nose involves the bone just above the teeth. This is a naturally concave area making it more susceptible to resorption with aging.  With resorption, the nasal base retrudes deepening the nasolabial fold areas and even helping close down the nasolabial angle a few degrees. Other than injectable fillers for the nasolabial folds, there few commonly employed augmentation options. They use of injectable hydroxyapatite granules and preformed paranasal and premaxillary implants can provide needed skeletal augmentation.

Resorption in the prejowl area of the lower jaw is the most vexing of all skeletal aging areas. Why this area resorbs is not clear as it is a naturally convex bone structure. But resorption causes a relative concavity in this area and contributes to the appearance of jowls. For those with weaker chins, jowls may appear earlier due to the increased lack of bone support. This area of resorption is the reason the prejowl implant exists which is most commonly used in conjunction with a facelift or combined with a chin implant.

Resorption of the facial bones is a contributing factor for many patients in an aging facial appearance. Strong facial skeletal features play a major role in why some people seem to age better than others. The next frontier in facial rejuvenation surgery is bone augmentation with or without soft tissue suspension.  Current technologies for facial skeletal augmentation  include hydroxyapatite and HTR granules and preformed facial implants.