The abdominal panniculectomy procedure is well known to be a ‘big’ operation. It is the supersized version of the traditional tummy tuck and is often judged by the weight of the pannus removed. The largest abdominal pannus I have ever removed is 85lbs and that was back in the pre-bariatric surgery era…when the abdominal panniculecomy was the only form of bariatric or weight loss surgery. 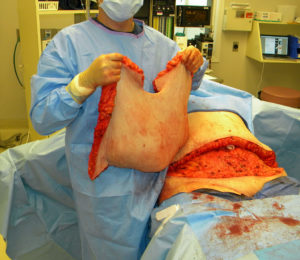 One of the challenges in this operation is to manage the considerable soft tissue mass, removing the most abdominal tissue that one can while still being able to close the wound without creating after surgery healing problems. When removed the abdominal pannus looks even bigger than when it is attached and hanging on the patient. The term ‘pannus’ is often associated with the word ‘apron’. It is easy to see why it might have that name as seen in this intraoperative picture where it could be worn like an apron once removed.

Beyond the light-hearted clothing analogy, the abdominal panniculectomy produces a dramatic improvement for the patient in many ways. It eliminates chronic skin infections and sores that develop underneath it and removes stressful weight from the back and knees that have to support and carry it around. It also allows the patient better clothing options, often allowing them to find outfits that fit better.

The abdominal panniculectomy is often thought of as a tummy tuck…and it is. But it is an operation that is much bigger in magnitude than most traditional tummy tucks as can be seen by the type of patient on which it is performed. White it is associated with a relatively significant rate of complications, like fluid collections and wound healing issues, these are often self-resolving issues and do not ultimately detract from the huge benefit that patients receive as a result from undergoing the surgery.