Male breast enlargement, known as gynecomastia, presents in various manifestations. While once gynecomastia surgery was most commonly done on teenage boys who developed small (or large) breast mounds that did not recede, today’s gynecomastia reductions are different.

Men are much more particular about the appearance of their chests today and are often intolerant of even the smallest protrusions. A flat chest with a nipple that lays flat is what men seek today. This has led to the most common form of gynecomastia that presents as an isolated areolar protrusion or mound. Known as a puffy nipple, the areolar sticks out from the surrounding skin. In some cases it is just the areola that sticks out and in others the protrusion can be seen to extend beyojd the areolar margins. 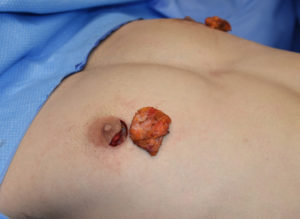 Areolar gynecomastia reduction is done through an open excision. The firm lump of breast tissue can not usually be removed by liposuction alone. And even if it could that leaves a small but visible scar on the chest wall on each side. Through an inferior areolar incision, the firm breast lump of tissue is carefully removed leaving a certain thickness of tissue under the areola to prevent an inversion deformity. Often the removal of the breast tissue will expose the pectorals muscle fascia.

Areolar gynecomastia reduction can be done under local, IV sedation or general anesthesia depending upon the patient’s preference. Since it does not involve any excision much behind the areolar margins or liposuction elsewhere on the chest, a drain is not used.