The only method to reduce the vertical length of the forehead (forehead reduction) is a hairline advancement. This is essentially a scalp mobilization procedure that changes the location of the front edge of the hair-bearing scalp through forehead skin removal. Its success depends on how much natural elasticity one’s scalp has. Lowering of the hairline with this procedure can usually be done anywhere from 1 to 2.5 cms in most people. 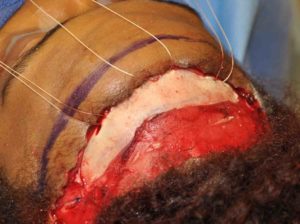 A good technique to reduce the tension of the scalp advancement flap is skull fixation. Using outer table burr holes placed with a handpiece and burr, sutures can be placed through the bone tunnels to secure the scalp flap. There are placed at the front edge of the desired advancement edge to maintain its position. This then allows the closure to the forehead flap to be done with little to no tension on it as well as preventing any scalp relapse. 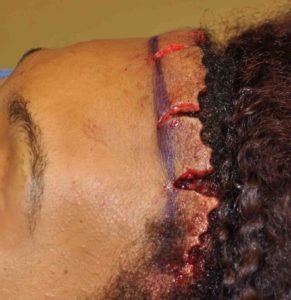 Once the advanced scalp flap is secured by bone fixation, the forehead skin flap is draped over it to determine the amount of forehead skin to be removed. This prevents over resection of forehead skin and serves as the second technique to ensure the best possible frontal hairline scar outcome.