There are numerous types of congenital chest wall deformities. In many such deformities the central sternum is affected. One of the most common of these deformities is pectus excavatum. The sternum is indented or depressed as the attached ribs are abnormally bent inward. There are many manifestations of this chest wall disorder from more minor sternal contour abnormalities to the entire anterior chest being sunken in.

The repair of pectus excavatum has evolved over the years with the greatest innovation being the Nuss procedure. Placing a rigid bar under the sternum and attaching it to the ribs remarkably bends the sternum and central chest wall outward. Once the metal bar is removed years later much of the chest wall shape improvement is maintained even in older adult patients.

But as effective as the Nuss procedure may be for many patients, it can often still leave the central sternum suboptimally projected. This manifests as a deeper valley or groove in the central chest. Such sternal depressions, whether after a Nuss procedure or from untreated more minor pectus excavatum deformities, can still be aesthetically bothersome for many patients.

There are numerous treatment options for sternal augmentation from fat injections to implants. The tight tissues of the sternum are a poor recipient site for injected fat persistence. The best sternal augmentation method, in my opinion, is that of an implant placed on the bone. This will have a permanent augmentation effect and can be custom made from the patient’s 3D CT scan or intraoperatively hand carved from silicone contoured carving blocks. 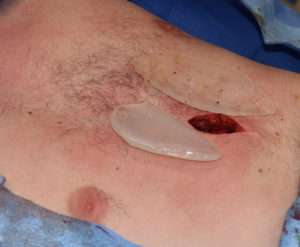 This patient had a prior Nuss procedure for pectus excavatum followed by the placement of a silicone sternal implant. While the implant provided some good improvement, it did not cover the full vertical length of the sternal defect and had a hump shape to it. It had originally been placed through a long vertical substernal incision. (which was unnecessary, a much smaller horizontal incision works just fine) I removed the old sternal implant, which turned out to be a modified silicone calf implant, and replaced it with a hand carved custom sternal implant from a contoured carving block.  A side by side comparison of the two sternal implants showed the differences in their shape. The hump deformity from the prior implant occurred because the curved surface of the modified calf implant was facing upward and its flat surface was facing downward. (the exact opposite from how its shape should be positioned.