Chin implants are the original and still today the most common form of facial skeletal augmentation. Having been around for over fifty years in various forms, chin implants have undergone many evolutionary changes in their shapes to satisfy a wide variety of aesthetic chin needs. Because of its history and frequent use, they have the greatest number of different styles and sizes off any type of facial implant.

But even with such a diversity of standard options, not every patient will do well with an off-the-shelf implant shape. This is where the role of custom implants comes into play where any dimensional need can be addressed through patient specific designing for unique chin dimensional augmentations. While extremely effective custom facial implants come at an increased cost over standard ones that may be a limiting factor for some patients. 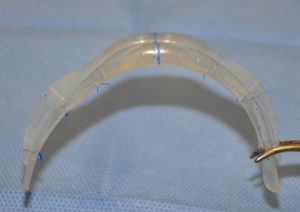 While chin implants can be modified by hand carving them during surgery, adding to them is a different matter. There is no recognized method for increasing the size or shape of a standard chin implant. In some situations I have found it effective to marry together two different implant styles to get the desired effect. This is an example where a prejowl implant is added to an anatomic implant to get wider wings for more prejowl augmentation. By suturing the implants together in multiple locations, shifting or one implant sliding off of the other is prevented.

It is acknowledged that the use of 3D imaging and implant designing is best for most unique chin augmentation needs. But in the right circumstances it is possible to create a ‘semi-custom’ chin implant using standard implants in a stacking technique with suture fixation.