Increasing the projection of the central midface at the base of the nose and upper lip involves augmenting the bony perimeter of the pyriform aperture. This anterior bony opening in the maxilla leads into the nose. At its more narrow end superiorly are the nasal bones. At its larger lower end the bone curves down and inward and meets in the middle to create the anterior nasal spine.

Because of the tree different zones of potential augmentation and the very limited implant styles available, this is a very confusing area for surgeons and patients alike. The only preformed facial implant available is the peri-pyriform silicone implant. By its name and shape it is a premaxillary-paranasal implant since it covers all three zones. But it can be sectioned in the middle and turned into just paranasal implants if desired. 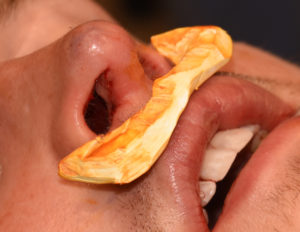 Another option to make a complete premaxillary-paranasal implant is to carve it out of an ePTFE block. Shaped almost like a moustache, the adaptability of this material allows it to be molded into placed over the central projecting spine and around the more concave sides into the maxilla. It may look large when positioned on the outside of the patient but it needs a lot of material to properly cover this central midface area.

The premaxillary-paranasal implant is placed through an intraoral incision under the upper lip. The key is to make the incision high enough on the lip side of the vestibule to maintain a good musculomucosavl cuff of tissue to close over the implant with a two layers of suture.