Implants are most commonly used for aesthetic augmentation of numerous muscle areas of the body. These include the chest (pectoral implants), calfs (calf implants), and buttocks. (gluteal implants) Less frequently performed, although no less successful, is that of the upper extremity of the biceps and triceps muscle.

One other muscular augmentation area of the upper extremity is that of the deltoid muscles. Known as the shoulder muscle, it is mass of three muscle bellies that provide width to the shoulders. While deltoid implants can be made from modifications to contoured carving blocks, it is a difficult area to get implant positioning from a remote incision. 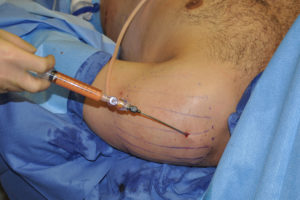 When possible deltoid augmentation should be initially attempted by fat injections. My experience has been that fat injected into the deltoid muscles has a decent rate of survival and retention. It also has the aesthetic benefit that its augmentation effect creates a broader surface area enhancement which is more comparable to the wider shoulder area.

Fat injection deltoid augmentation is done primarily subfascial and into the muscle. The subcutaneous tissues over the shoulder are usually fairly thin. All three deltoid muscle bellies should be injected. The usual fat volume injected is between 150cc to 300ccs per shoulder area.

Whether fat injection deltoid augmentation should be done over deltoid implants depends on how much fat the patient has to harvest. Because of the lower concentration rates of fat harvests in men, one should have at least 500cc to 750cc in harvest volume.