The LeFort I osteotomy moves the upper jaw and is done by a horizontal bone cut above the level of the upper tooth roots across the maxilla and nose. This allows the entire dentoalveolar unit of the maxilla to be moved horizontally forward or vertically up or down. When seen intraoperatively it is a dramatic procedure when one sees the whole upper jaw brought down to peer into the maxillary sinuses and the nose. 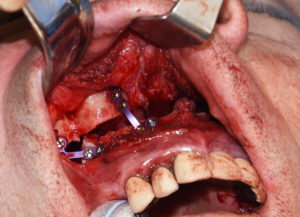 A much less known maxillary bone procedure is that of the premaxillary osteotomy. As the name suggests it is just a part, the front part to be specific, of a LeFort I osteotomy. This is the anterior maxillary segment that contains the six front teeth from canine to canine. It is unique from the Lefort I osteotomy because it requires a vertical bone cut between the canine and premolar teeth as well as a bone cut across the palate to get the bone segment to move.

The indications for a premaxillary osteotomy are very limited. The picture in this blog is from an older patient who wanted his front upper teeth moved up and back to correct a lifelong tongue thrusting problem. This was able to be done for him because he was already missing his first premolar tooth on the right side and had a decayed second premolar tooth on the opposite side which could be removed. This provide a safe space to make the vertical bone cuts.