The smallest presentation of gynecomastia is areolar enlargement or a type 1 gynecomastia. This is also known by how it appears as a puffy nipple. While this can mean a long or protruding nipple, it usually refers to a small growth of breast tissue that sits right under the nipple. It appears as a small hard lump that can be felt under the nipple and causes the nipple-areolar complex to protrude. It may or may not be associated with an elongated nipple as well. 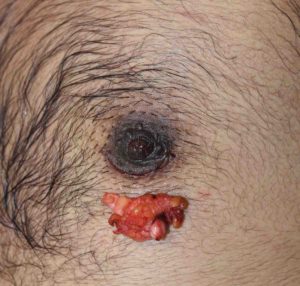 The treatment of the puffy nipple areolar gynecomastia is open excision. The hard lump can not be moved by liposuction. The inferior areolar incision heals very well and should not be avoided because of scar concerns. The amount of breast tissue removed is usually no bigger than the size of a quarter. But its removal will instantly reduce the protruding areola. If needed, subtotal or complete nipple reduction can be safely done at the same time as well for a more complete nipple-areolar flattening effect.

Open excision of small gynecomastias is an art form and the amount of tissue to be removed is an intraoperative judgment. On the one hand over resection is to be avoided so a crater deformity does not result. Conversely under resection, although aesthetically safer, will create less areolar projection but will not make it completely flat. This results in my experience for a 10% to 20% revision rate for this type of male breast reduction surgery to get the most symmetric and complete nipple flattening effect.