Aesthetic buttock surgery has evolved over the past four decades into a  wide variety of reshaping procedures available today. Historically only excisional procedures for removing excess tissue at the top or bottom of the buttocks existed. Implants became available in the 1990s but they remained used in the U.S by only a handful of patients. Liposuction around the same time became popular and efforts for buttock reduction met with mixed results.

The real game changer in aesthetic buttock surgery emerged by the mid 2000s which was fat grafting for buttock augmentation. (aka Brazilian Butt Lift) Over the past decade so called BBL surgery has become the fastest growing body contouring procedure and is reflective of the increasing ethnic populations in the U.S. as well as contemporary beauty trends amongst them. It is done by numbers more than all other buttock reshaping procedures combined. 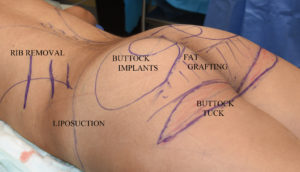 It is important to understand, however, that such buttock reshaping procedures are not exclusive of each other. Some patients may benefit by combining several of these procedures in a single buttock reshaping effort. This recent body contouring procedure I performed illustrates the maximal use of very available aesthetic buttock procedure. Int her case the combination of rib removal (#s 10, 11, 12), liposuction of the abdomen/flanks/waistline, intramuscular buttock implants, injection fat grafting to the lower buttocks and a lower buttock tuck were done. It would be fair to call this the ultimate buttock makeover surgery.

While fat injection grafting remains the most commonly performed buttock augmentation procedure, it can not solve all buttock shape problems. Narrowing the waistline above the buttocks by liposuction and less commonly rib removal is well known to make any buttocks look bigger. Implants offer assured volume in those patients who do not have enough fat to harvest to do a complete buttock augmentation. Smaller amounts of fat grafting can be performed with buttock implants, particularly when the implants are placed inside the muscle. Sagging lower buttock tissue can not be improved by liposuction but requires excision. Such a tuck procedure shortens the vertical height of the buttocks and helps make it more round particularly when combined with any form of augmentation.