Facial fractures in children are not nearly as common as that in adults for a variety of reasons. Undeveloped bones that bend but do not break and less exposure to differing methods of trauma are the main reasons. But the one trauma exposure that children and teenagers are exposed is that of sports. When it comes to sports, the flying object of some form of ball that makes inadvertent facial contact is likely. 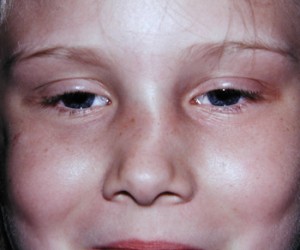 In the June 2013 issue of the journal Plastic and Reconstructive Surgery, a paper was published entitled ‘Non-Fatal Sport-Related Craniofacial Fractures: Characteristics, Mechanisms, and Demographic Data in the Pediatric Population’. This study examined how and when facial fractures occur in various sports using 167 children and teens seen over a five year period for sports-related fractures. To no surprise, 80% of those injured were boys. Most were between the ages of 12 and 15 years old. The most common fracture was to the nose (40%) followed by orbital fractures (34%) and skull fractures. (31%) Many of the children were injured by a sports ball and about half involved attempting to catch a baseball or softball. Only 10% occurred with a basketball or football. Collisons with other players, most often seen in soccer, accounted for 25% of the injuries. Falls accounted for nearly 20% of the injuries.

Facial fractures from sports like skiing or snowboarding occurred in children who were not wearing helmets. Horseback riding injuries were the result of being kicked. Although horseback and skateboarding injuries were not common, they were often much more serious.  Almost half of the children injured were admitted to the hospital for either surgery or observation. Really significant facial fracture injuries that resulted in an unstable airway or spinal cord injury were uncommon, occurring in less than 5% of the patients.

What this study shows is that some facial injuries can be prevented by the use of protective equipment. Wearing helmets in the most risk-prone sports such as skateboarding and skiers and googles and nasal protectors in other smaller ball-related sports can be very helpful.