Tummy tuck or abdominoplasty surgery recontours the waistline area out into the hips. Most tummy tucks do influence the area below the location of the incision line known as the mons pubis.  While it is commonly believed that the upper abdominal skin flap covers the entire area of abdominal tissue excision in a tummy tuck, the reality is that some of the defect excision is covered by the lower skin flap being lifted. This always has the potential of affecting the mons pubis.

While the mons can be affected by pregnancy, it is most changed when one undergoes significant weight loss. With the weight loss, the pubic area becomes deflated as well causing it to sag and remain full. It may sag enough that it interferes with the urinary stream as well as sexual function.  Lifting of the mons can be incorporated into a tummy tuck design by changing the location of the lower incision and suspending and thinning of the mons concurrently. 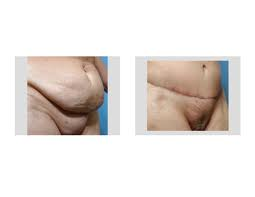 While a monsplasty is relatively easy to perform and visually appears to be highly successful, no study has ever been performed on its outcomes. In the September issue of Aesthetic Surgery Journal, a study was published on the cosmetic and functional results after monsplasty in patients who had lost more than 50 lbs. Over 50 female patients who underwent tummy tuck surgery and were at least 3 months after surgery constituted the study population. Patients completed a satisfaction survey looking at parameters of appearance, genital visualization, hygiene and sexual function.

The average weight of the abdominal tissue removed was between 1 and 5 kgs. (average 3.25 kg) Visualization of the genitalia improved in every patient, ranging anywhere from 25% to 100%. Patients rated the appearance of their mons on a scale of 1 to 10 as 3.2 prior to surgery and 8.6 after surgery. Hygiene improved in over 60% of the patients and sex life improved in over 50% of patients. Interestingly, nearly one-third of the patients reported increased genital sensitivity. A decrease in incontinence and a change in urinary stream also occurred in some patients.

Much like plastic surgeons see and hear from patients, a monsplasty is equated with high levels of patient satisfaction as well as functional improvement. Given that a monsplasty adds little risk of complications to a tummy tuck and avoids the need for a secondary procedure, it should be employed in most every massive weight loss patient.