The Effects of Taping After Rhinoplasty Surgery 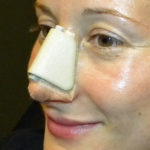 In rhinoplasty surgery, it is standard of care to apply a compressive dressing to the external nose at the completion of surgery. It usually consists of glued on tapes and an overlying splint made of metal or plastic. Its purpose is to both limit how much swelling will occur in the nose as well as to help the overlying skin to stick back down and redrape over the reshaped osteocartilaginous framework.

These external nasal dressing are removed one week after the surgery. Thereafter some surgeons continue with an additional period of taping while other surgeons do not.

In the May/June 2016 issue of JAMA Facial Plastic Surgery, an article was published entitled ‘Effect of Postrhinoplasty Taping on Postoperative Edema and Nasal Draping – A Randomized Clinical Trial’  In a randomized clinical trial, almost sixty rhinoplasty patients over a six month period were either taped or not (controls) after their initial external dressings was removed. Skin thickness was measured before and afterwards by ultrasonography over the followup periods out to six months. Compared with the control group, continued taping had a positive effect in thick-skinned patients over most of the nose except the tip. Postrhinoplasty taping had no effect in thin-skinned noses.

The swelling resolution and skin adaptation to a rhinoplasty takes a long time to see the final result. This is well known and the time frame can easily extend from six months to a year after surgery. Anything that may expedite this process would be helpful. Continued taping beyond the first week after a rhinoplasty is a bit of an inconvenience for most patients from a social standpoint. This it would be helpful to know how much of a difference, if any, it has.

It is not surprising that in thin skinned nose no benefit to continued taping was seen. That would certainly be what I have observed in many rhinoplasty patients. But the thick skinned patient is always a rhinoplasty challenge. Persistent swelling in the tip and supratip area often has a major influence on the final result. This study shows that it does have some usefulness and should be considered in these more problematic noses.