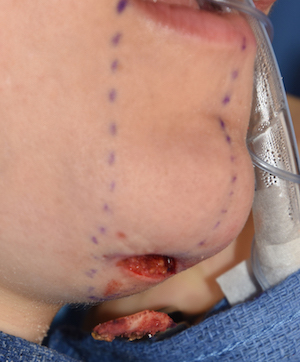 Chin reduction is a challenging operation because it is a 3D projecting structure with a tightly adherent soft tissue pad that wraps around the bone. When reducing the shape of the bone the specific dimensions needed to get the desired effect must be initially determined. But with the changes in the bone it is also important to ensure that the soft tissues adapt down to it to avoid postoperative sagging or soft tissue redundancies.

Many think of chin reduction as a decrease in the forward projection of the chin probably because the most common form of chin augmentation is an increase in horizontal projection. But reduction in its length or height are just as common although under appreciated. Reducing the vertical dimension in chin reduction presents unique challenges in both bone as well as soft tissue reduction.

Vertical chin reduction can be done from either an inraoral or submental approach, each with different soft tissue considerations. If a pure vertical chin reduction is needed an intraoral wedge removal osteotomy can be performed. This creases a reduction greatest in the center but not at the far sides of the chin due to the angle of the bone cuts. Because the soft tissues remain attached on the bone of the chin they are pulled up with the reattachment of the downfractured chin segment to the superior intact part of the chin bone. 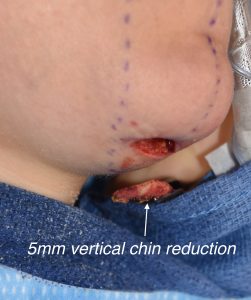 But when a combined horizontal and vertical reduction is needed, the submental or inferior approach is preferred. This allows for a more versatile shaving technique to be used after the soft tissues are detached. Once the bone is shortened and shaped, the soft tissues need to be modified and reattached as well. Besides the excess skin and fat that is seen by the two different skin levels on each side of the incision, fibers of the geniohyoid muscle that were released for the bone removal must be resuspended as well. 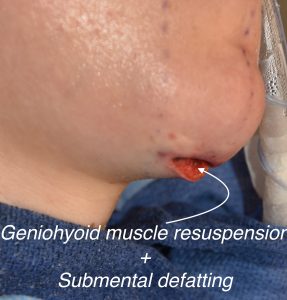 Reattachment of the released muscle fiber back to the bone helps pull up the lower submental tissues behind the incision. This combined with skin and fat removal level out the two sides of the incision and ensure that the combined vertical and horizontal chin reduction is fully seen. (after all swelling resolves) This also tightens the tissues around the end of the chin to prevent any postoperative ptosis.