Augmentation of the upper arm is a combination of development of the biceps and triceps muscles. The biceps is the most recognized of the two upper arm muscles and the most pursued in terms of exercise development and arm flexing. The biceps muscle is a two-headed muscle that extends on the anterior surface of the upper arm from the shoulder down to the elbow. The muscle originates on the scapular bone and inserts across the elbow on the upper forearm bones. Its main function is to flex and rotate the forearm

While weight training and other forms of exercise are the best way to develop a larger and more prominent biceps muscle, there are biceps implant surgeries to bypass the natural augmentation methods. Biceps implants can be placed in the subfascial location over the muscle to enhance its muscular profile. 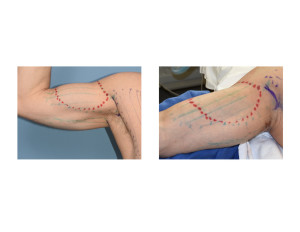 Bicep implants surgery is done in the supine position through an incision placed high in the armpit. This is the identical incision used for the placement of pectoral implants. Iyt does not need to be more than 3.5 to 4cms in length. This iincision is up under the lateral edge of the pectoralis muscle so it will be fairly hidden when it heals.

The bicep muscle fascia can be identified under the fat underneath the incision down towards the arm. The fascia is incised and the subfascial pocket is dissected with a long smooth instrument down to just above elbow. A silicone contoured carving block (Implantech) is used and carved to length as needed. The implant is easily inserted along the full length of the subfascial pocket.

The fascia is closed and the overlying skin closed in two layers. An ace wrap along the full length of the arm is used as the only dressing.