The labiomental fold is a small and often overlooked facial feature. Lying between the lower lip and chin, it is a crease or fold of varying depths amongst different people. Why a labiomental fold even exists at all is a function of many factors including chin projection, the attachment of the mentalis muscle to the bone, the size of the soft tissue chin pad, the depth of the intraoral vestibule and the size and projection of the lower lip.

While often thought irrelevant, it becomes a more important aesthetic issue in chin surgery particularly that of augmentation. Since the labiomental fold is a fixed anatomic structure, its appearance will be affected by increasing chin projection almost regardless of the method to do so. As the inferior chin comes out further, the superior labiomental fold by contrast will look deeper. There is nothing a chin implant or a sliding genioplasty can do, on their own, to make the labiodental fold less deep.

Softening a deep labiomental fold requires a direct approach whether it is an injection technique or an implant. Injecting filler or fat is often not rewarding as the tightness of the fold makes it hard to get a good push outward. 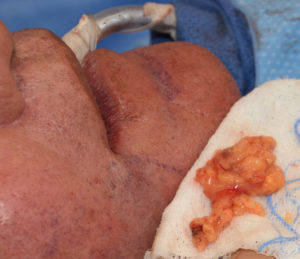 An alternative strategy is to perform a full release of the dermal attachments of the fold above the mentalis muscle through an intraoral approach and then place a soft tissue graft. A fat graft is a good choice for the filler material and can come from a variety of sources including a dermal-fat graft and a solid fat graft like that from the buccal fat pads. (as shown here)

Release of the deep labiomental fold well above the bone level (north of the mentalis muscle and not south of it) is the key for successful fat grafting in efforts to soften it.