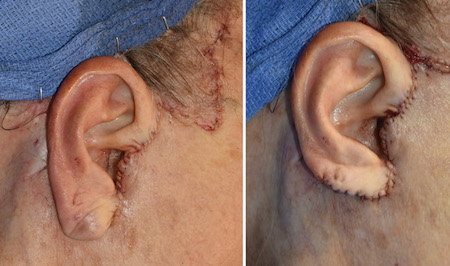 A facelift is the most recognizable facial rejuvenation procedure. While there are numerous versions of the operation a fundamental component of it is the placement of incisions in and around the ear. While these ear incisions provide access for tissue tightening and removal, their closure is also very important for determining the aesthetic outcome. Most of the recognizable poor outcomes from facelift surgery come from malformations of ear shape and alterations of the temporal and occipital hairlines.

One aesthetic issue of the ear in facelift surgery is in the patient who has a large or long earlobes. This is particularly common in older females whose earlobes have become elongated both due to age and ear ring wear. Unlike the rest of the ear which is supported by an underlying cartilage framework, the earlobe has no such  support. As a result it is prone to becoming elongated with skin stretching/relaxation. (yes it is true that ears do get longer with age( While the facelift may produce a nice improvement in the contour of the neck and the jawline, a large remaining earlobe on a tightened face can be an aesthetic distraction. 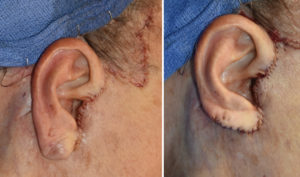 An earlobe reduction can be done at the same time as a facelift. It is performed at the conclusion of the ear skin closures. While there are different techniques for earlobe reduction, the one that is most versatile with a facelift and produces the best scar is the inferior helical rim excision method. This is done by removing the bottom part of the earlobe is removed in a curved fashion. Besides allowing for the creation of the best earlobe shape, it can be done regardless of how the ear has been reattached to the side of the face from the facelift surgery. (direct attachment vs invert V attachment)

Performing earlobe reduction at the same time as having extensive incisions around the ear has understandable blood supply concerns. This can be magnified with the vasoconstrictive effects of epinephrine used in the local infiltration of the incisions and surrounding facial tissues. But the remaining blood supply coming from the top of the ear as well as coming up through the perichondrial attachments to the cartilage are adequate to avoid any devascularixing effect to the earlobe and support normal healing.