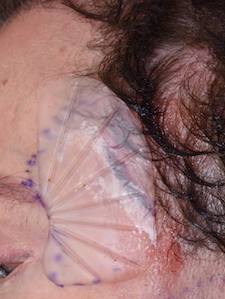 Implants are the one assured permanent method for temporal augmentation. Besides guaranteed volume they also assure a smooth contour due to the outer contour of the implant. (assuming they are placed without inducing any folded edges) 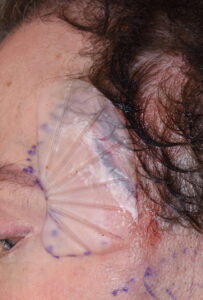 The direct incisional approach for the placement of the temporal implants allow immediate access to subfascial pocket development. It is perfectly safe as the frontal branch of the facial nerve crosses more anteriorly in the non-hair bearing skin. The only structure to look for is the crossing of the superficial temporal artery which can usually be palpated and swept superiorly after being identified once through the skin incision. 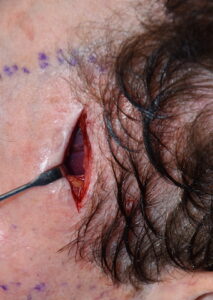 The incision used for the fascia can be bigger than that the skin. Once under the deep temporal fascia the pocket on top of the muscle can be created easily and assuredly from the anterior line of the forehead down to the zygomatic arch. The implant will need to be folded for insertion and then unfold once inside the pocket. Once the layout of the implant has been checked by an elevator on the underside of the implant, closure is done for the fascia and skin.

The only obvious negative to the direct approach is the hairline scar. This is not an issue at all in the patient who already has a hairline scar from a prior procedure. But in the scarless patient the decision to place use this approach must be considered carefully.