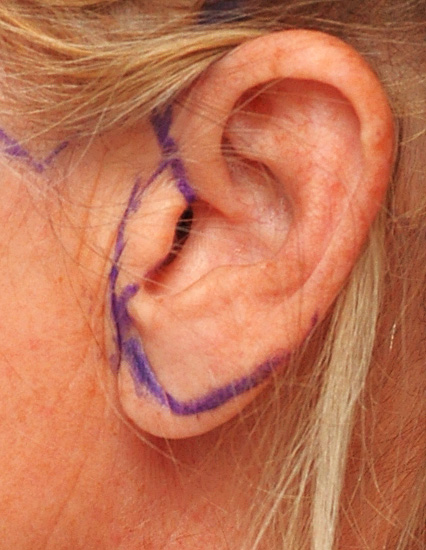 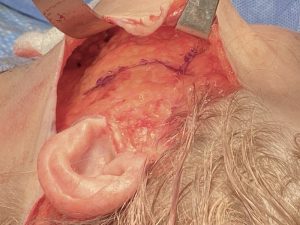 A fundamental component of any lower facelift surgery are the incisions placed in and around the ear. These incisions do not  completely encircle the ear but usually approximate about 75% of its perimeter. Through these incisions the skin flaps are raised and the SMAS flaps elevated for bidirectional facial tissue lifting.

But regardless of the length of the ear incisions for a facelift, the earlobe is always encircled on its front and back sides. It subsequently becomes an important area of skin closure and can become the most visible indicator of having had a facelift if the scarring around it becomes visible or the earlobe becomes elongated from supporting the repositioned skin.

Unlike the rest of the ear, the earlobe has no structural support and is prone to undergo natural elongation. Gravity, age and ear ring wear are well known causes of it becoming longer. Thus the length/size of the earlobe is an important preoperative assessment before facelift surgery as tightening up the face but leaving a long earlobe is the antithesis of any anti-aging facial surgery. 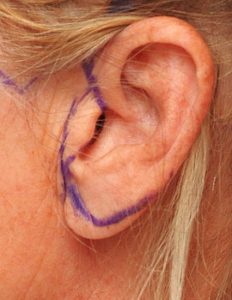 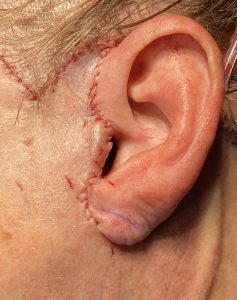 Earlobe reduction can be done at then time of a facelift. The key is that the best candidates have an unattached earlobe that is long.  The amount of earlobe reduction is marked before surgery along with the other facelift marking. The facelift is completed and the elevated skin flap cradles up under the earlobe and closed. 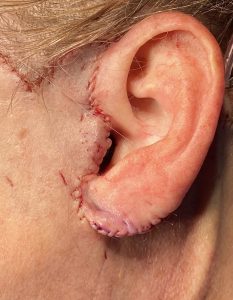 The earlobe reduction is then done by an inferior helical rim excision technique, usually using sharp scissors to do the excision. Closure is done by a running over and over reservable suture.

This is a safe technique as, even though the blood supply is cut off from the earlobe from its facial skin supply, there is enough perfusion coming down from the ear to allow for uncomplicated healing.