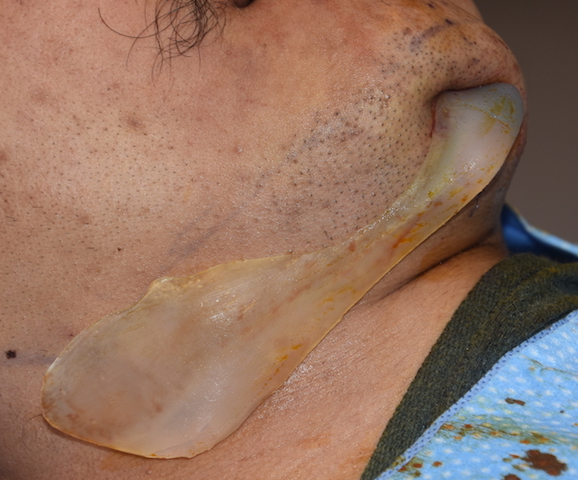 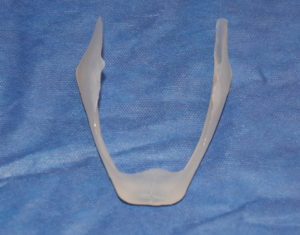 While a custom jawline implant can provide an unparalleled amount of lower facial change, it must be able to be inserted in an effective manner with good positioning and the creation of minimal scar in so doing. There are two methods to meet all of these criteria which will only work when the jawline implant is composed of solid silicone. It is either as a one-piece front to back technique or a two-piece back to front technique. A solid silicone material has the flexibility necessary to allow either insertion method to be done with the creation of only a 2.5cms submental incision. 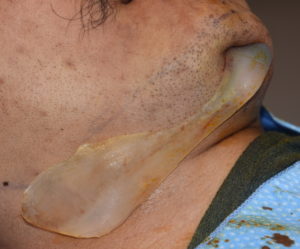 To eliminate dragging the implant through the mouth which reduced]s the risk of infection, the front to back insertion technique is almost always preferred. This technique can be done when the jaw angle portion of the implant can be adequately folded to slide under the mental nerve without causing it injury as it is passed in the front to back direction. Through the initial submental incision subepriosteal dissection is done over the entire chin and as far back towards the jaw angles as can be seen. Then through incisions made inside the mouth along the ascending ramus opposite the back molars, subperiosteal dissection is done over the entire jaw angles which then connects to the pocket created from the chin. With complete jawline subperiosteal dissection one side of the jawline implant is inserted from the submental incision. 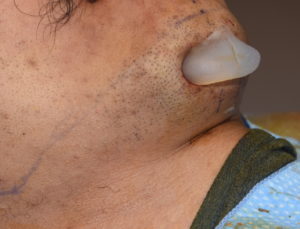 By keeping the chin portion of the implant out of the incision, and the one inserted side not fully stretched all the way to the posterior ramus of the jaw angle, the second side is fold and inserted. Retrieval of the jaw angle portions of the implants are done through the intraoral incisions. 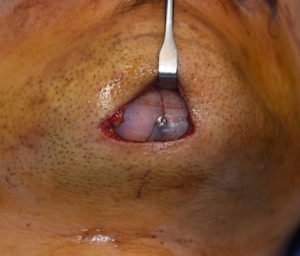 Once both sides are inserted, the two sides of the jaw angle portions of the implant are pulled fully back…bring the chin implant inside the submental incision. The chin portion is then positioned as designed, checked for both midline position and a level horizontal orientation, and then secured with either one midline screw to two paired screws off the midline.

The jaw angle implant sections are then secured by double screws percutaneously placed and all incision closed after a combined betadine-antibiotic solution irrigation.

This minimal incision custom jawline implant placement technique works because the implant has flexibility. While this initially seems inappropriate by some for a bone augmentation implant, it is an erroneous concept to believe that jawline implants should be rigid like bone. As long as the material has an adequate durometer (measure of material rigidity) the implant acquires the characteristics of its backing or what it is placed on. This is most easily understood when comparing wallpaper on and off a wall. It would be different if the implant was totally replacing the bone. But when used as partial coverage (onlay) where the bone occupies much more of the total overall volume than the implant, a completely rigid and stiff implant is not needed.