Cheek dimples are indentations in the central area of the chin soft tissue pad of varying degrees of depth. They are caused by a defect in the mentalis muscle and thickness of the overlying fat that causes the skin to be drawn inward. It is a genetically-inherited trait and has been associated with chromosome 5. It should be differentiated from a chin cleft which is a larger soft tissue indentation that is vertical in orientation and usually sits lower on the chin pad.

While a chin dimple is simple in anatomy, that does not make it easy to create one in a chin pad that does not have one. Few techniques for creating a chin dimple have been described and they are often portrayed as simply suturing down the skin from inside the mouth behind the chin pad. The reality is that it is not quite that simple as the chin pad has thick soft tissue and a suture alone can not reliably create a permanent soft tissue indentation. 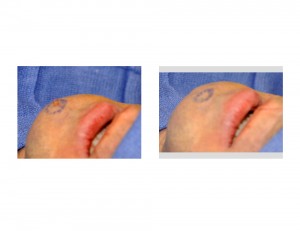 The success of chin dimple creation surgery can be variable and the dimple may not hold after it is initially done. I have found greater success using a modified suture technique. From an intraoral approach a central core of tissue (muscle and fat is removed) up to the underside of the skin. Using a resorbable suture on a straight needle, it is passed through the skin at the intended dimple site and then back though again through a separate hole just 1 to 2mms away from the previous exit site. This suture is then tied down to either the muscle or bone to create the indentation. 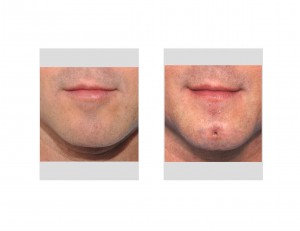 This chin dimple creation technique creates an immediate effect that should be a little deeper than one desires allowing for some relaxation as it heals. The resorbable suture lasts long enough to allow the indentation to heal down and will be absorbed weeks later after the small amount of swelling has subsided.