There are numerous strategies to improving the shape of the buttocks of which the most popular is the Brazilian Butt Lift. (BBL) While this buttock augmentation method is called a lift, it really does not lift the buttocks at all.  It fills out the buttocks to make it bigger or more round but is not a formal buttock lift per se.

Prior to the current craze of BBL surgeries was the era of a true buttock lift procedure. Such procedures were excisional in nature, requiring the sagging buttock tissue to be removed and the remaining tissues tucked in its place. While many lifts are perceived as being pulled up, a buttock lift is really done on the bottom side of the buttocks for a tissue overhang or ptosis. Its goal is to create a more defined infragluteal crease with no tissue overhang. The most common reason women request this procedure is because they want to get rid of buttock tissues that hangs out of a swimsuit or underwear. (an overextended infragluteal fold) 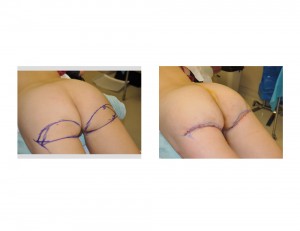 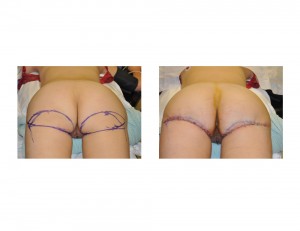 Precise markings are done before surgery to define the new location of the fold and to prevent its lateral extent from going to far to the side lest it become visible after surgery. The amount of tissue to be excised is done by creating a fold of the lower buttock tissue to the level and shape desired and then mark the upper and lower edges of it. A crescent pattern is then marked. During surgery, the crescent-shaped zone is excised and the skin edges anchored to the gluteal fascia to create a more defined infragluteal crease. 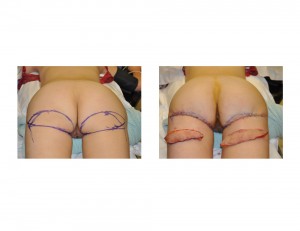 It is important to remove full thickness skin and fat in the lower buttock lift rather than simply de-epitheliazing the skin and folding it together for a higher gluteal fold  position. This effectively gets rid of the tissue overhang to allows for a better fold shape.