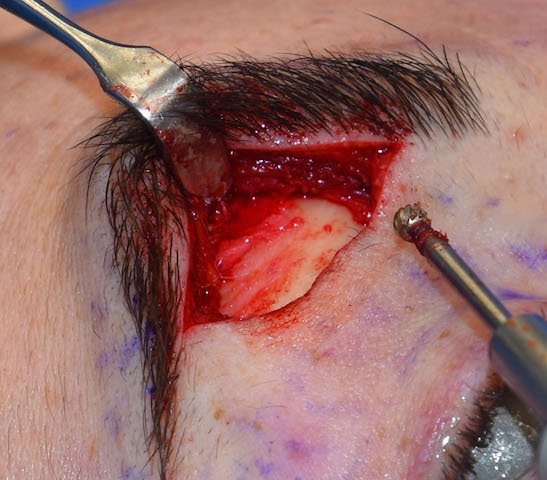 Brow bone reduction for prominent supraorbital ridges is done in both men and women. The standard approach is from a scalp access whether that is done from a coronal or frontal hairline incision. By exposing the entire forehead and brow bones through forehead flap turn down, burring or bone flap reduction techniques can be used.

While for most women the consideration of a scalp incision is not usually an operation limiting consideration, for some men it may be. Men with very short hair, thinning hair or shaved heads, a long scalp incision may be an aesthetic liability that is not the forehead shape change that brow bone reduction achieves. In some men with pre-existing horizontal forehead wrinkles I have used it for a mid-forehead incisional approach to the brow bones and it has not proven limiting for even a bone flap technique.

But in the young male with a bald top of the head with no forehead wrinkles, surgical access is limited to some form of an eyebrow incision. Whether that should be placed at the superior or inferior eyebrow hairline can be debated although I prefer an infra brow location given the orientation of the eyebrow hairs. With the lower eyebrow hairs coming out at a near 90 degree angulation an incision placed here is better camouflaged than a superiorly placed one.

With an incisional length of 3.5 cms subperiosteal dissection can be done across the entire brow bone area including the glabella and the lateral orbital rim. The supraorbital nerves can be easily found and protected with small ribbon retractors. Even though the access is limited burring of the brows can be done with reduction of 2 to 4mms potentially achieved. Healing of the infra brow incisions does well.

It may be possible that the bone flap technique may be able to be done through the infra brow approach but I have yet to do so.