The size and shape of the forehead occupies the entire upper third of the face. It is the flattest real estate of the face and is surrounded on all sides by some form of hair. The vertical length of the forehead is the distance between the frontal hairline and the eyebrows and is considered excessive when it exceeds more than 6.5 cms.

The type of forehead reduction that shortens the skin distance between the eyebrow and the frontal hairline is known as a hairline advancement. The downward movement of the hairline is created by the mobilization of the scalp. The ability of the scalp to move and stretch is based on it own natural elasticity and to what extent it is undermined to do so.

Mobilization of the scalp is done at the subperiosteal/subgaleal level and is carried as far back from the frontal hairline as possible . The best scalp mobilization comes when it is extended posteriorly all the way down to the nuchal ridge of the occiput. This can be challenging with doing the elevation from the open access from the forehead. 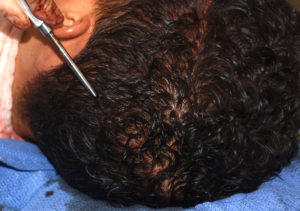 The technique I have found helpful to get to the occiput for mobilization in a hairline advancement is to approach it directly. Rather than trying to ‘turn the corner’ over the crown of the skull from the front, making two small counter incisions on the sides of the occipital scalp allows for direct instrumentation. A 1 cm incision placed lateral to the pathway of the greater occipital neuronscular bundle that courses superiorly allows for an elevator to be inserted and complete the scalp mobilization on the back of the head.

While some scalps have a lot of natural stretch, most do not. Getting the hairline to move forward (inferiorly) requires freeing up the scalp extensively behind it. Maximal scalp elevation combined with pericranial releases allows for the greatest amount of moment that the scalp will allow.