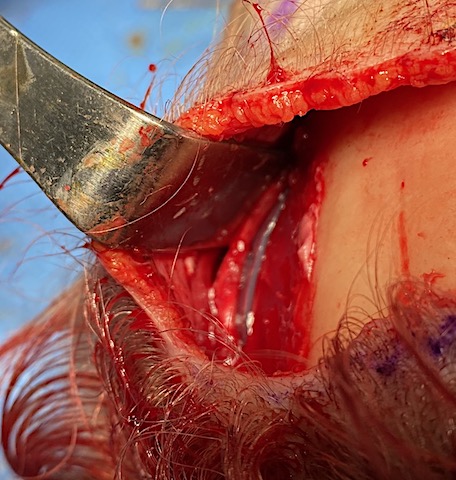 Temporal implants provide a permanent volume enhancement of the natural and/or congenital hollowing that can occur by the side of the eye. Such implants are typically placed through a vertical incision at or behind the temporal hairline. As the procedure was originally described the incision was back in the temporal hairline. But my extensive experience demonstrates that it can also be effectively placed through a incision at the crease of the ear at its upper half. This then allows for an essentially scarless procedure.

These typical incisional accesses place the temporal implant at a perpendicular or horizontal direction to the pocket that needs to be created. There is a more superior incision for placement that can be used but only under special circumstances when another procedure is being performed…that of either a browlift or soft tissue forehead reduction when a frontal hairline incision is used.

The frontal hairline incision allows for a unique superior direction of placement for temporal implants. This is particularly  relevant for the extended temporal implant whose height (vertical length) is three times that of its width. Such a long implant requires a more vertical pocket dissection through which a superior direction is actually ideal. 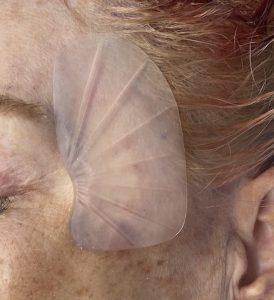 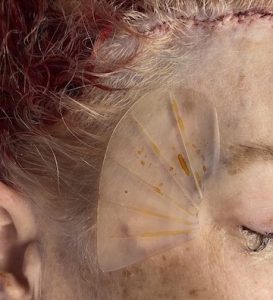 When using the extended temporal implant, regardless of its direction of placement is to establish its length. For some patient s the preformed length of the standard implant is too long. It can be easily trimmed from the bottom (maintaining a smooth feather like upper edge) using the indented lines in the implant. (which are actually there for that specific purpose) The thickness  or size of the implant us usually the 3 to 4mm range particularly for females. 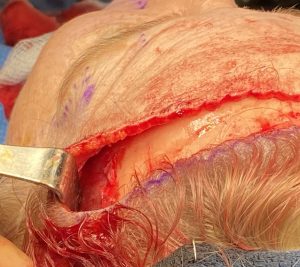 From the frontal hairline incision the deep temporal fascia is identified. A horizontal incision is made in the fascia below the temporal line, maintaining a cuff of fascia for the closure. A wide periosteal dissector is used to create the subfascial pocket on top of the muscle down to zygomatic arch. 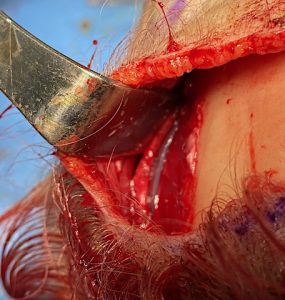 The implant is inserted in a flat unfolded fashion which should fit perfectly since the correct length has already been determined. The fascia is closed over the implant with a running suture. 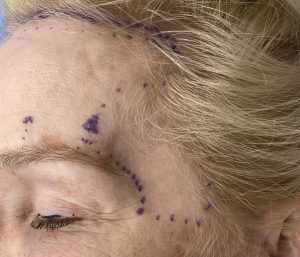 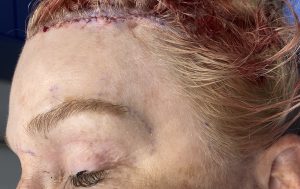 The effects of the temporal augmentation will be immediate with a smooth contour. Most postoperative swelling subsides by ten days after surgery.

The frontal hairline incision provides a superior access for temporal implants that obviates the need for an additional incision. It is an opportunity to piggyback another procedure onto one that is already being performed.