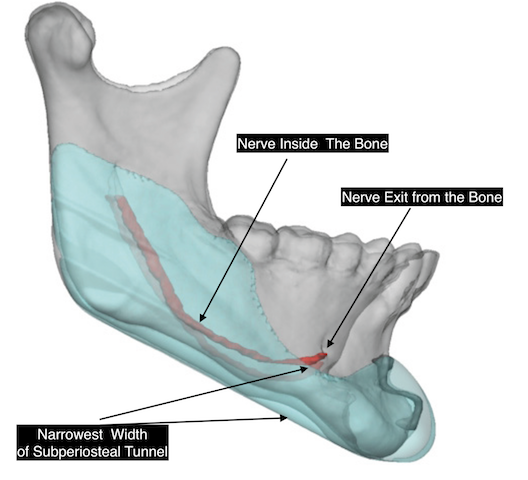 A custom jawline implant is the most effective lower facial augmentative reshaping procedure. By changing the shape and size of the entire inferolateral border of the jawline from angle to angle the transition between the face and the neck becomes more visible and defined. But unlike more limited standard chin and jaw angles implants whose incisions directly over their placement location is straightforward, how does such an elongated jawline get placed with acceptable scars?

The key is the material property of elastic deformation. This is essentially when the implant material can be deformed with pressure and then when released it returns to its original shape. This is a key property of solid silicone jawline implants and their placement through the triad of small submental and intraoral incisions. When initially comparing the submental incision vs the size of the implant it seems that placement would not be possible. 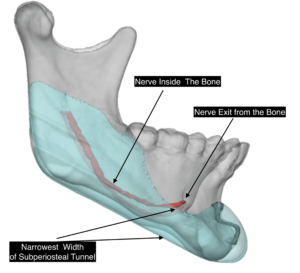 To be able to pass the implant in a front to back direction as a single piece from the submental skin incision requires the ability of the implant to be folded at the jaw angle portion. The jaw angle height is the tallest portion of the implant and would not fit under the mental nerve without injuring it if it was rigid. But solid silicone has the elastic deformation material property. Thus the jaw angle portion can be filed over and clamped. It is then able to be passed under the mental nerve portion of the tunnel safely.

Solid silicone and its material property of elastic deformation allows custom jawline implants to be able to be placed through remarkably small skin and intraoral incisions. While the flexibility of the material allows its placement, once in place it still feels like bone. Like wall paper on a wall, the overlay material assumes the rigidity of the backing on which it lies.