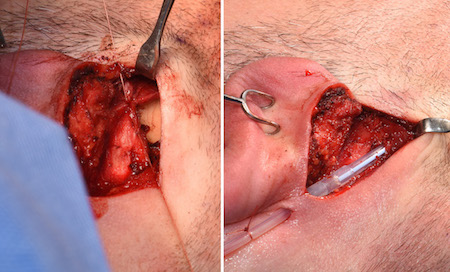 Reducing the width or convexity of the side of head is best done by a muscle-based  procedure. Removing the entire posterior portion of the temporalis muscle provides an assured technique given the natural width of the muscle in the 7mm to 9mm range. But besides the actual bitemporal width reduction the shape of the sides of the head always changes from convex to a completely straight frontal profile.

This procedure is performed from an incision from behind the ear which allows for a direct ‘line of sight’ when making the subfascial muscle cut. From the top of the ear up to the temporal line in an anterior oblique direction the muscle cut is made with electrocautery in a full thickness fashion. This creates an arbitrary boundary between the anterior and posterior muscle from which the entire posterior section of the muscle is removed. 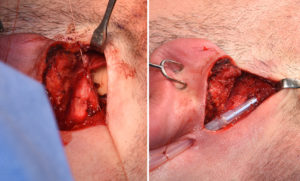 With the muscle cut and removal, a step off exists between the remaining anterior muscle and the exposed bone behind it. This is palpable beneath the scalp skin and theoretically eventually risks being seen externally. While this blunt 90 degree muscle edge will not remain so because of eventual tissue atrophy, I always feel the need to reduce this risk as much as possible. Once technique is to cauterize the muscle edge to encourage muscle atrophy. Another technique relates to why the procedure is done in a subfascial method. Closure of the fascia helps create a dampening effect on the muscle edge due to its tightness. The fascia is closed with a drain exiting below it.

While I have not had any patient from temporal reduction surgery report any aesthetic issues with the residual cut edge of the muscle, the fascial closure technique helps make for a smoother transition.