Technical Strategies – Repositioning of the Upper Ear in Otoplasty 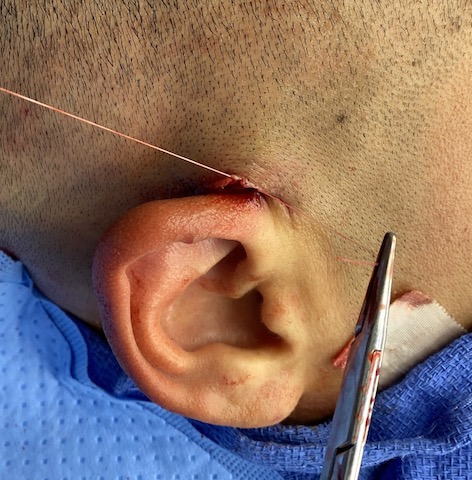 Otoplasty for protruding ears is the most commonly performed aesthetic procedure of the external ear. Its technical execution has been described by a large number of cartilage manipulation techniques to make the ear less prominent. What is shared by every technique is that the goal is to bent the ear framework into a modified shape that has either a greater bend to the antihelical or less of a conchal concavity.

The vast majority of ear cartilage lies in the center of the ear around the concha and the external auditory canal. The earlobe is completely devoid of cartilage and the superior helix is like a wing of cartilage hanging from the upper concha.  For this reason the main effects of setback procedures are seen more in the center third of the ear which is usually the part that sticks out the most. This is also why the classic telephone  ear deformity occurs…the effects of cartilage manipulation are strongest in the middle, leaving the upper and lower third of the ear ‘behind’.

The bottom the ear or earlobe is unaffected by any cartilage manipulation maneuvers. This is why separate soft tissue earlobe procedures exist when it remains protrusive with the cartilage setback above it. Less appreciated, even though it has cartilage in it, is the very upper third of the ear can also remain protrusive. 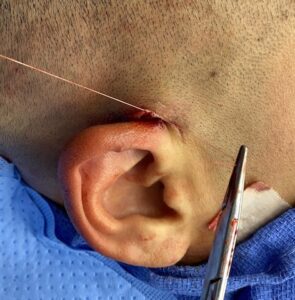 Some patients may feel that the superior helical rim is still too far way from the side of the head and not in balance with the rest of the outer contour of the ear. This upper ear cartilage can be very refractory to traditional cartilage suture techniques. An effective method for an upper otoplasty is to make a direct incision in the upper postauricular skin crease and place permanent sutures between the back of helical root cartilage and the deep temporal fascia to pull it in. Any redundant skin in the crease created by the upper ear pull in can then be excised. Both maneuvers create an effective and permanent inward pull of the upper ear at the helical root.