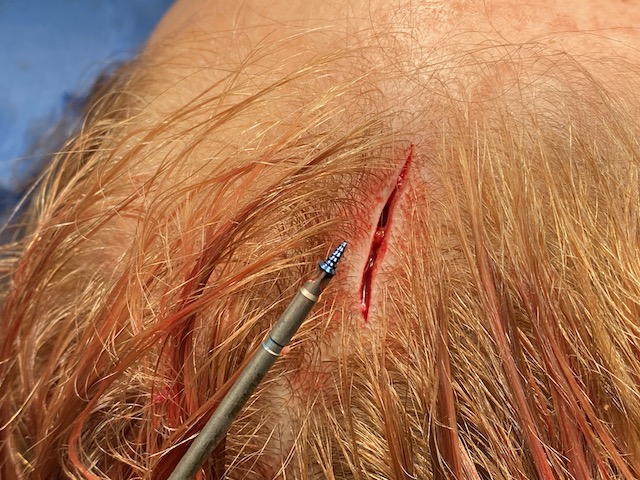 The endoscopic browlift is a well known upper facial rejuvenation procedure that has over twenty years of clinical experience. Rather than excising scalp or forehead skin the procedure achieves its effects through an epicranial shift. This means that the scalp is loosened from the brow bones all the way to he back of the head…which will then allow the whole scalp to be shifted backward raising the position of the eyebrows.

One of the key elements which supports the epicranial shift in an endoscopic browlift is a method of bone fixation. The upward shifted forehead/scalp most be supported in position to allow it to readhere back down to the bone for long term maintenance of the repositioned brows. While this periosteal readhesion occurs fairly quickly (10 to 14 days), that is also ample time for brow descent to occur.

Numerous methods have been described for fixation of the endoscopic browlift. The lateral or outer brow incisions is situated over the temporal region where suturing to the deep temporal fascia of the muscle is the only choice. It is the incisions over the bone across the top of the head between the temporal lines where fixation to the bone is needed. 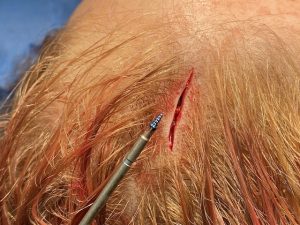 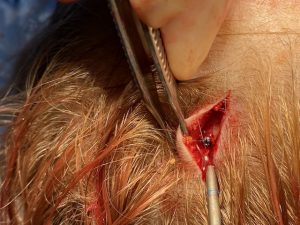 Soft tissue bone fixation for the top of the skull falls into two categories, bone tunnels and bone fixation devices.  Each has their advantages and disadvantage but both work equally well. Any form of bone fixation is always better than no fixation at all. One secure technique that can be done through the smallest scalp incision is the self-tapping titanium screw. Using a 5mm length screw it is quickly secured to the back end of the longitudinal median scalp browlift incision. Longer screw lengths are to be avoided since they are difficult to self-tap fully into the dense outer table of the skull. 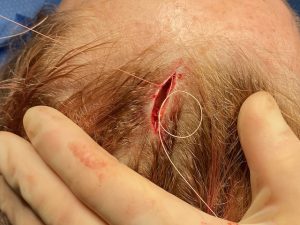 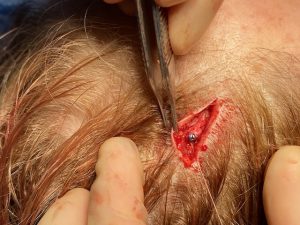 Using  3-0 resorbable suture, the needle its passed internally through the fascia under the front end of the incision. The other end of the suture is prepared by making an external loop in it. This will allow it to be looped over the internal screw and the scalp can be advanced posteriorly as the suture is tightened to it. Additional suture tightening is obtained as the screwhead is tightened firmly done to the bone.

The small titanium self-tapping screw is an inexpensive and rapid method for endoscopic browlift fixation. It is non-palpable and there is no need for its removal unless the patient wants to do so in the future. It could then be easily removed under local anethesia.