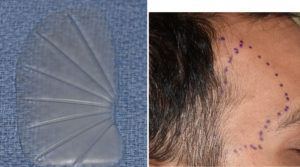 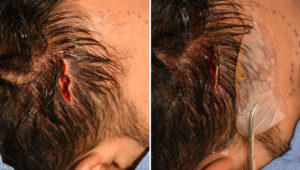 Style 1 temporal implants are traditionally inserted through a small 2 to 3 cm skin incision back in the temporal hairline which provides direct linear access for the creation of the subfascial pocket and the placement of the implant. One would assume that the larger style 2 extended temporal implant requires a longer skin incision to place but this turns out not to be true. Due to the flexibility of the implant material, it can be inserted through an equally small skin incision as that of the smaller style 1 temporal implant. It is important to remember that placing the implant is not like putting a pizza into the oven, it does not have to pass through the incision is the same shape but which it needs to reside in the subfascial pocket. It is of equal importance to also not create an adverse scar liability in this operation.

Extended Temporal Implant Placement technique Dr Barry Eppley IndianapolisOne of the keys in placing extended temporal implants is that it can be folded for insertion through the incision. This will allow it to easily make it though the skin incision. However it becomes very important to ensure that it lays properly in the pocket with all edges unraveled and in the correct orientation. Thus requires moving the implant partially in and out of the incision and using instruments underneath it to ensure that all edges of the implant are completely unfolded and laying flat. This also requires the the subfascial pocket be made bigger than the implant which is to occupy it. The attached video demonstrates how the extended temporal implant needs to be placed to ensure that its proper placement occurs.

The extended temporal implant, while originally a style made for a select few patients, has now become the more standard implant use for permanent temporal augmentation in my practice. This is because it covers a larger surface area which more appropriately covers the extent of temporal hollowing that many patients have.