The traditional chin bone procedure for aesthetic enhancement is that of a sliding genioplasty. Cutting the chin bone and moving it forward has been a facial bone reshaping procedure that has been done for over half a century. It is mainly used as a bony alternative to a synthetic chin implant for chin augmentation. It is less frequently done for reductive chin procedures not only because there is less need but there is generalized less public and even surgeon awareness.

Reducing the bony chin works best for reducing its height and/or width. Moving the bone back for horizontal chin reduction is fraught with causing other soft tissue problems. Such bony chin manipulations have achieved greater awareness more recently due to the popularity of the so called ‘V-line’ Jaw surgery. While frequently used in Asians to reduce their wide and prominent jawlines, it is becoming more common to use it in females with a large lower jaw of any ethnicity. 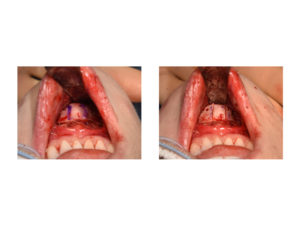 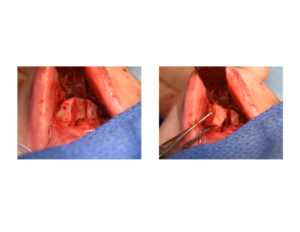 A fundamental component of V-line jaw surgery is in how the front part of the jaw, the chin, is reduced. To shorten and narrow it the type of osteotomy pattern (bone cuts) must be different than the traditional sliding genioplasty. While a horizontal bone cut is still used, a double horizontal bone is used to reduce the vertical chin height. The space between the bone cut depends on how much vertical height needs to be shortened. The down fractured chin segment is then cut vertically in two parallel cuts whose space between them is the amount of chin width that has been predetermined to be reduced. 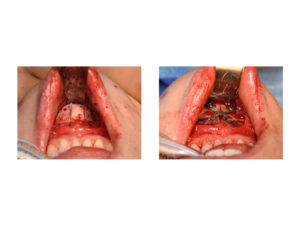 This leaves the chin in three pieces; a stable fixed upper segment and two smaller mobile lower segments. The three bone segments are brought together with midline alignment of the two lower segments and fixed together by a single plate and screws. The bone cut patterns and how the chin is put back together creates the T-shape.

Since the chin width is narrowed by sliding the bone segments to the middle, there is often a step off along the lower edge of the jawline at the back end of the horizontal osteotomy line. Care must be taken to look for it and reduce it if needed.

The success of this type of chin reduction depends on how much bone is removed and how well the overlying soft tissue adapts to a smaller underlying bone support.