Temporal implants have come into usage to create a permanent augmentation effect of the muscle to the side of the eye. Some temporal augmentation patients have been through injectable fillers and fat injections first while others opt right for a permanent surgical effect with implants. These soft and very flexible implants are designed to replicate the feel of muscle unlike other facial implants which are design to feel like bone. 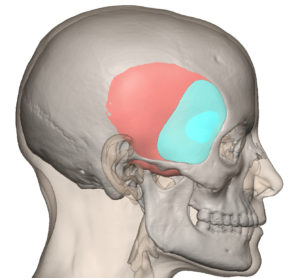 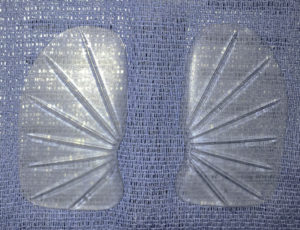 When temporal implants were first introduced they were only available for what has become known as Zone 1, which is the temporal area by the side of the eye. This is always the deepest part of any temporal concavity. But as more patients were seen and treated it became clear that some patients had temporal depressions all the way up to the side of the forehead which incorporates what is now known as Zone 2. To optimally treat these patients an extended temporal implant was developed that combined both Zone 1 and 2 temporal areas.

In looking at an extended temporal implant it is obvious that is bigger (longer) in the vertical dimension. This raises a concern that the size of the implant means that a bigger skin incision is needed to place it…but this turns out not to be the case.

Extended Temporal Implant placement Dr Barry Eppley IndianapolisThe flexibility of the extended temporal implant is the key to placing it through a small incision. Such an incision should be placed higher up in the hair-bearing temporal region as it is easier to slide a long implant down rather than up since the thickest part of the implant is at the bottom. As the video demonstrates the implat is folded to insert it through the incision. Its high elastic deformation property allows it to resume its original form once inside the pocket. To enable the implant to lay out as it is. designed, an instrument is inserted on its underside and the edges worked until one is certain they are all unfolded and the implant ones in the desired vertical orientation.

The similar insertion and placement principle applies to the use of the extended temporal implant through other inciseonal accesses as well such as different types of browlifts.