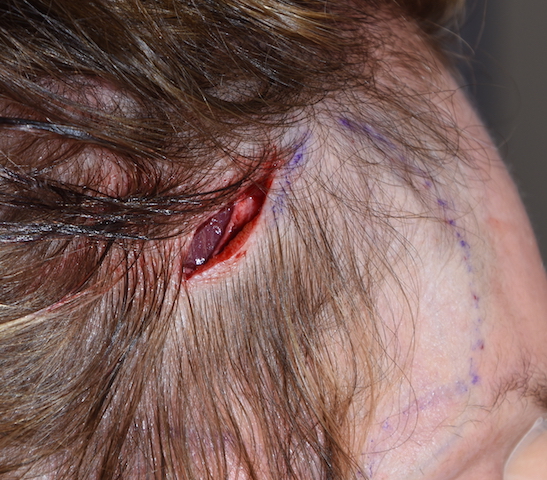 Permanent augmentation of the temples is done by specially designed implants that are unique to this facial area. Other than the lips the temples is the only facial area in which it is soft tissue not bone that is being augmented. This poses several unique implant considerations such as the need to have the implants made of an ultrasoft solid silicone material that replicates the feel of muscle. Such implants must also add assured volume that is both smooth and contiguous with the surrounding tissue areas.

Temporal implants are placed in the subfascial location which is far superior to either a subcutaneous or submuscular location. When placed just under the skin above the fascia the outline of the implant will ultimately be seen when the shrink wrap effect occurs when healing is complete. If placed down at the bone level, the deep location under the very thick anterior temporal muscle produces a partially camouflaged augmentation effect and one that does get close enough to the lateral orbital rim to look natural.

Because the temporal implants are placed under the fascia and on top of the muscle, there will be some short term effects from the muscle trauma. This includes some temporary swelling and mouth opening stiffness. But the recovery from these initial temporal implant augmentation effects is fairly quick.(10 to 14 days at most) 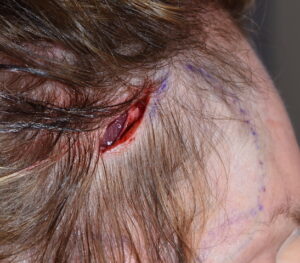 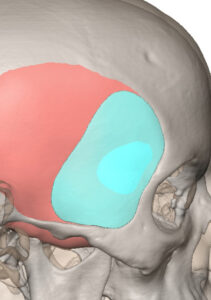 One of the considerations in temporal implant surgery is incision location. There are a variety of incision placement options from along or behind the temporal hairline to a retroauricular location. But for the most direct incision location that offers the lowest risk of placement complications, the high temporal scalp location is preferred. This is if particular relevance when using the extended temporal implant design which is the most common one used.

With a long temporal implant length coming from above offers numerous advantages. First it is above the anterior branch of the superficial temporal artery, thus avoiding an inadvertent injury to it and the need for ligation of it. Secondly a vertically long dissected subfascial pocket allows for ease of implant placement through a small incision. The ability to get it properly unfolded, particularly the thinner upper edge of the implant, is aided by the proximity of the incision. Lastly, the further up the incision is located in the temporal area the potential for scar visibility becomes less.

Temporal implants provide a permanent and smooth augmentation to the non-hair bearing area to the side of the eye almost up to the lateral forehead bony line. The higher retrohairline incision provides direct vertical access to both making the implant pocket and placing the implant. As a muscular enhancement procedure, placing the implant under the fascia on top of the muscle translates to a significant effect. Thus for most women it is prudent to not over size the implant thickness.