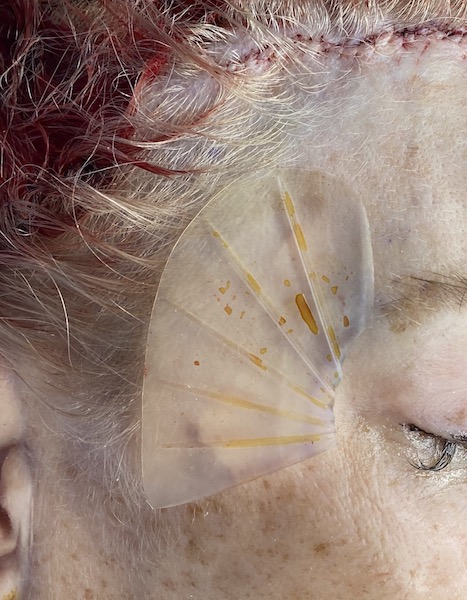 Temporal hollowing is a common sequelae of aging particularly in the thin female. While the actual temporal muscle does not shrink significantly with aging, the temporal fat pads do. Thin females do not have sizable temporal fat pads initially and whatever is there may largely shrink with age.

The most common treatment for temporal hollowing is injectable, either using synthetic fillers or fat. Each has their own merits but the one assured permanent approach is surgical using temporal implants. Volume restoration at the muscle level, not subcutaneous, is the target as this is where the hollowing effect occurs. Temporal implants are placed at the subfascial level on top of the muscle to simulate a more natural augmentation effect. 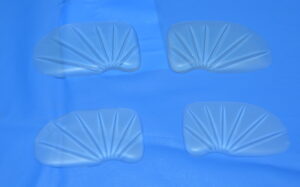 Temporal implants come in two basic styles, standard and extended. For most cases of female hollowing the concavity exists from just above the zygomatic arch inferiorly up to the lateral temporal bony line of the forehead. The extended temporal implant style works best for this more complete temporal hollowing problem. They come in two different thicknesses, 4 and 6mms. 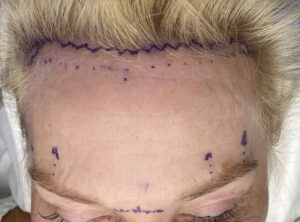 If one is having surgery, particularly surgery for the upper third of the face, the use of temporal implants for concomitant correction of temporal hollowing is a logical one. One of the most convenient times to do so is if the patient is having a browlift particularly an open hairline browlift. (but could be done just as easily through a coronal browlift) 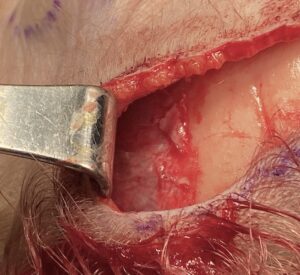 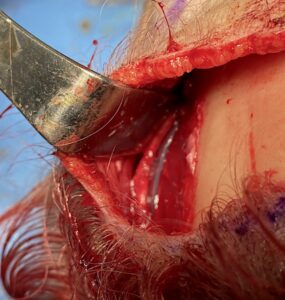 From the hairline approach after the subperiosteal elevation has been completely done, the deep temporal fascia is identified. Just below the bony temporal line, leaving a cuff of fascia for closure later, the fascia is opened and the subfascial pocket elevated down to the zygmomatic arch and up along the lateral orbital rim. The extended temporal implant with the 4 or 6mms size chosen is then placed in a superior insertion direction. The pocket is adequately created if the upper end of the temporal implant rests easily just under the temporal line fascia. 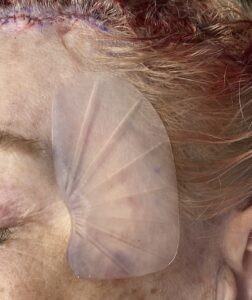 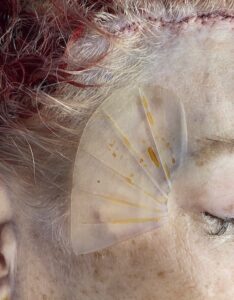 The height or vertical length of the extended temporal implant may be too long for the patient’s zygomatic arch to temporal line distance. The temporal implant may be reduced in height by cutting along one of the grooves or lines in the implant at its bottom edge. The smooth feathered edge of the upper part of the implant should also be preserved as that is impossible to replicate by any form of hand trimming. 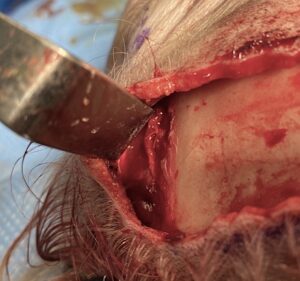 With the implant in passive position in the subfascial pocket the temporal fascia is closed over it with reservable sutures. No drain or any form of implant fixation is needed. 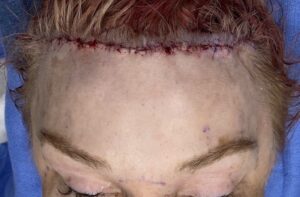 Temporal implants are a great complement to any form of forehead/brow reshaping when significant temporal hollowing exists. It is actually the best direction of implant placement as the anterior temporal region is taller than it is wide…just like the implant’s shape.