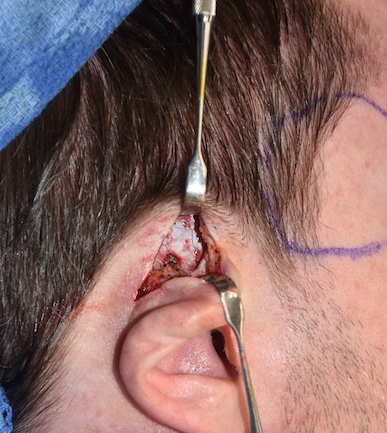 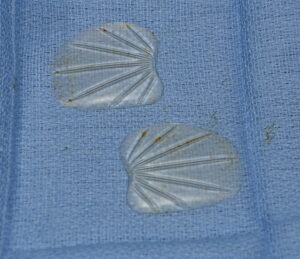 Temporal implants offer a permanent method for volume augmentation for a hollowed contour by the side of the eye.  Such implants are often sought after either acceptable results from injectable fillers but a permanent result is desired or due to unsatisfactory results from fat injections.

The success of temporal implants is based on their subfascial pocket location. By putting the implant on top of the muscle and under the deep temporal fascia visible edging is avoided which was the historic problem with prior efforts at temporal implants. 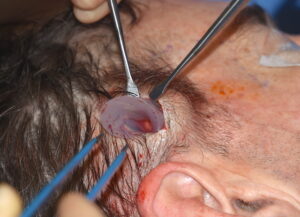 The traditional incision used for temporal implants is placed back in the hairline. A small vertical incision is used which is just big enough to allow a folded implant to be introduced after the subfascial pocket has been created. This is the most direct approach as the distance between the incision and the pocket is very close.

While this is a very effective approach it also leaves a very fine line scar which for many patients is not an issue. But in patents with very short hair or even a shaved head there is always some potential scar concerns. 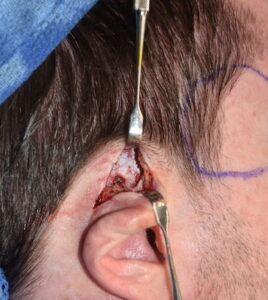 As a result an alternative incision location is a little bit back further at the top and back of the ear. A superior postauricular incision can be used which also provides easy access to the deep temporal fascia. And the distance between the pocket and the incision is only mildly increased. 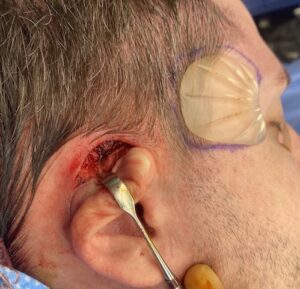 The one difference with this incision location is that after the implant is introduced it will not longer be visible. It will not be possible to see its exact placement as the posterior edge will not be able to be seen. This is more of a potential issue in the thinnest temporal implant which are the most flexible and the easiest to inadvertently flip an edge. When in doubt one can make a very small vertical incision (5 to 6mms) closer to the implant where its posterior edge will be visible. 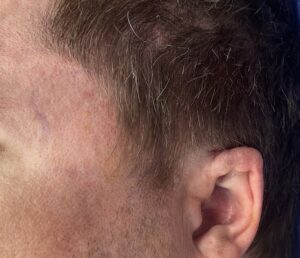 The postauricular incision should probably not be the first approach used if one has never placed temporal implants before. But with experience this is an effective and ‘scar-free’ approach for temporal augmentation.