Augmentation of temporal hollowing has become a popular aesthetic procedure. While synthetic fillers and fat offer simplicity, they do not create a permanent treatment solution. Temporal implants fill that need and can be placed through a relatively minor surgical procedure.

The first generation standard temporal implants are of a soft flexible silicone material that is designed to simulate muscle tissue. It has a shape that simulates the lateral orbital rim anteriorly, the zygomatic arch inferiorly and then tapes superiorly and laterally into a tapered edge. It is longer horizontally than vertically and is designed to treat the deepest part of temporal hollowing which is at the lower half of the anterior temporal region between the eye and the temporal hairline. 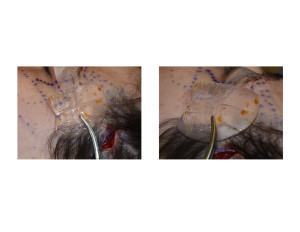 The standard temporal implant offers some versatility in how it can be used to create its temporal augmentation effect. In the subfascial location, it offers two options for the extent of its effect based on how the implant is oriented.