The epicanthal fold or epicanthus refers to a visible skin fold that covers the inner corner of the eye. While everyone has some degree of an inner eye skin fold, the prominent epicanthal fold is most commonly associated with the Asian eye. (although many other ethnicities have it as well) They can also occur in Down’s syndrome as well as fetal alcohol and Turner’s syndrome. The height of the bridge of the nose is also a factor in its occurrence. Low nasal bridges have a high association with the epicanthal fold while high nasal bridges do not, presumably due to the stretch of the skin between the eye and the nose.

The epicanthoplasty is a procedure done to change the shape of the epicanthal fold. While it is most commonly associated with double eyeliod surgery, it can also be done as an isolated procedure in patients with a distinct upper eyelid fold. In these patients the most common technique is a z-plasty. This eliminates the downslanting fold as well as creates a horizontal orientation of the inner eye. 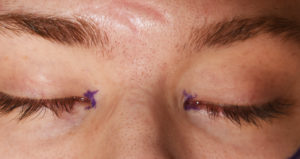 The inner eye z-plasty is carefully marked with its long axis along the fold and the back cuts at 45 to 60 degrees. The limbs must be marked so the switch of the skin flaps creates the change of the fold. Once cut the skin flaps need to be released of any fibrous attachments to the medial canthal tendon. Small dissolvable sutures are used for the skin closure.

The medial epicanthoplasty has a role to play in the non-Asian eye. It can effectively change the inner eye corner from a down slanting to a horizontal orientation.