Chin implants are the most common facial bone augmentation procedure. The vast majority are done using silicone materials which makes for easier introduction as well as uncomplicated and expeditious adjustments/removals. But other chin implant materials exist of which the most frequently used is that of porous polyethylene, also known as Medpor. By virtue of its textured surface it achieves a circumferential encapsulation that adheres to the implant surface. 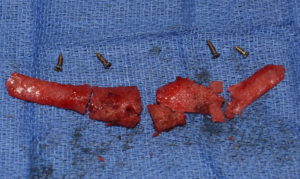 Having removed hundreds of Medpor implants there are several techniques I have learned to make it easier. First, it is best to mobilize the implant from the bone surface first. There is no one ingrowth that occurs into the material and the fixed surface of the bone makes it easier to elevate from the bone than from the overlying soft tissues. Second, If the screws that have been used to fix the implant can not be unscrewed, cut the implant in sections and remove it from around the screws. The screws will then be left standing which makes them straightoforward  to remove. 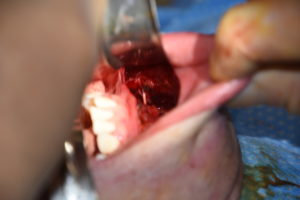 Lastly, be aware that the wings of a chin implant often are attached to the mental nerve. Care must be taken to carefully lift the soft tissue over the lateral wings of the implant which is also the hardest area to see clearly. It is easy to inadvertently tear one of the branches of the metal nerve.