Temporal hollowing has become a target for aesthetic treatments with the expansion of injection therapies. Injectable fillers and fat injections are the most common temporal augmentation methods. The ease of their use as non-surgical and minimally invasive treatments makes them very appealing to patients and doctors alike. However the temporal region is one of the least satisfying facial areas for injection from an aesthetic standpoint due to unpredictable volume retentions and evenness of the result. In addition, although rare, complications such as blindness and cerebral emboli have been reported. Understanding the anatomy of the temporal would help provide safe guidelines for injectors. 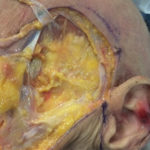 In the September 2017 issue of the Aesthetic Surgery Journal, an article was published entitled ‘Anatomical Study of Temporal Fat Compartments and its Clinical Application for Temporal Fat Grafting’. In this beautifully illustrated cadaveric study, the authors dissected both sides of the temporal regions in eight cadavers looking at its neurovascular and fat compartment anatomy. Their specific intent was to understand the anatomy for the purposes of safe injectable fat grafting. In the subcutaneous layer two fat compartments were identified as a lateral temporal cheek and lateral orbital compartments. In the deeper loose areolar tissue upper and lower temporal fat compartments were found. The anterior branch of the superficial temporal artery and the frontal branch of the facial nerve are located in the superficial temporal fascia. The nerve runs parallel with the artery. The sentinel vein has a vertical orientation and runs just behind the lateral orbital rim through the superficial and deep temporal fascia to drain into the middle temporal vein deep into the muscle.

Based on these studies, the authors conclude that all four fat compartments above the deep temporal fascia are good sites for injection augmentation, particularly fat grafting. Because of the location of the upward course of the neurovascular structures, injecting at at or behind the front edge of the temporal hairline is safe. It is most safe when done in the upper half of this temporal region. Because of the location of the sentinel vein and the frontal branch of the facial nerve, the front half of the lower temporal compartment should be approached with caution or avoided completely. 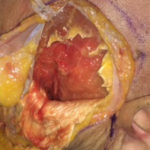 While this study was done for the purposes of augmentation done above the deep temporal fascia, it validates the safety of temporal implants…the only method of assured permanent temporal augmentation that also creates a smooth out contour. Since temporal implants are placed under the deep temporal fascia, they avoid all neurovascular structures and have no risks of many of the potential injectable temporal augmentation problems. Surgical access is done behind the front edge of the temporal hairline, a safe zone substantiated by this anatomic study. Only the anterior branch of the superficial temporal artery and the auriculotemporal nerve are in this area, both structures which are easily avoided or can be transected without any adverse sequelae.