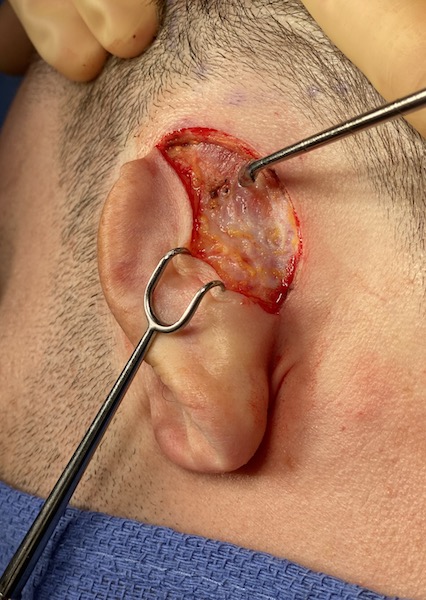 Temporal reduction surgery is an innovative procedure for reducing the width or excessive convexity on the sides of the head. It is based on the removal of the thinner posterior portion of the temporalis muscle which can be up to 1 cm in thickness per side. Access to do the procedure is done from an incision in the upper half of the postauricular sulcus behind the ear which heals in a scarless manner. 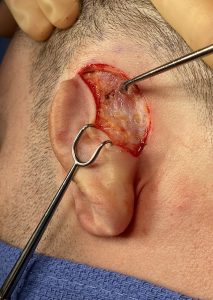 In making the postauricular incision a superficial set of muscles is encountered right below the skin level and well above the dissection target of the deep temporal fascia. These are the posterior auricular muscles which originate from the mastoid bone and inserts into the cartilage on the back of the ear. By its origin and insertion points its effect on contraction is to pull the ear backwards. This ear change is usually very slight but in some people the muscle action is stronger and allows them to wiggle their ears for a more visible ear movement effect. Estimates are that 10 to 20% of people have the capability to do so.

To reach the deep temporal fascia and the posterior temporal muscle it is necessary to transect the thin postauricular muscles. In doing so the ability to wiggle one’s ears will be permanently lost. Fortunately this loss of muscle action has no adverse functional effect. All that is known about this discrete ear muscle action is that it is a vestigial function but with no present day beneficial effect.  (that has yet to be identified)