The Aesthetic Effects of the Bony Genioplasty – Horizontal Augmentation

Changing the position of the bony chin through an osteotomy is the alternative to that of an implant for certain chin reshaping effects. Unlike an implant, however, a bony genioplasty is capable of a wider array of dimensional changes. The bony chin position can be changed in all three dimensions from increasing horizontal projection, adding vertical length as well as making the chin wider or even less wide. These dimensional changes in combination with being an autologous operation are its main differences over an implant. While viewed by some as a highly invasive operation, it is the easiest to learn and master of all the ‘craniofacial bone surgery’ techniques.

The term ‘sliding genioplasty’ is how this bony chin operation is most commonly referred. But this is an archaic and inaccurate term today as to how the operation is done and used. Historically this operation was done as the name implies…the chin bone was cut and slide forward along the osteotomy line and then held in position with wire fixation. It was largely restricted to a horizontal movement and the use of wire fixation limited it to that main effect. 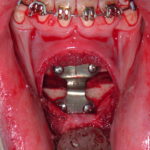 But along came plate fixation and the movement of the chin was no longer controlled by the osteotomy line. Plate fixation allows the downfractured bone segment to be placed in the desired dimensional position without the need for complete bone contact for healing. As a result a more contemporary term for the operation should be a ‘bony genioplasty’ with the prefix as what dimensional change is being done. While many still think of the bony geniplasty as a the alternative option to an implant, on a global basis the most common bony genioplasty performed today is a reductive one as part of an overall jawline reduction operation. 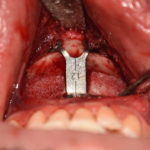 Compared to a chin implant the amount of forward projection by moving the bone may be greater. How far the chin bone can be moved forward is dependent on the thickness of the mandibular symphysis. Horizontal movements can be up to 16mms as evidenced by the availability of chin step fixation plates in those movement amounts.

But the tradeoff for medium to larger forward chin bone movements is that the chin will likely appear more narrow in the frontal view. This occurs due to the geometric effects of taking the front part of an inverted U (when viewing the jaw shape from below) and making the front edge of it longer. This is an important consideration for men and is where an implant can provide width as the chin projection is increased. In women, however, this narrowing effect may an aesthetic advantage to keep the natural chin width or make it even more tapered.

One of the underappreciated effects of a sliding genioplasty is its effects on reducing submental fullness by the forward pull of the bone. Due to the muscle and other soft tissue attachments there is some horizontal elongation of the neck tissues…a concomitant aesthetic benefit. Submental and neck contouring techniques, liposuction and submentoplasty, can improve further upon that natural effect of a forward bone elongation for an improved neck contour.

Patients need to be aware that the depth of the labiomental fold, by definition, is often going to get deeper as the chin bone comes forward. This is the unavoidable sequelae of changing the projection of the chin below the fixed point of the mentalis muscle origin. Filling in the bony step between the upper bone and the mobilized lower bone may help soften this fold deepening effect.