The Anatomy and Surgical Technique For Cheek Dimpleplasty

« Plastic Surgery’s Did You Know? Saline Breast Implant Noise
A Structured Approach to Treatment Planning of the Aging Face »

Cheek dimples are considered by some to be an attractive facial feature. Why there are appealing is not precisely known but, since they appear largely on smiling, one can assume that they cast an impression of happiness. For others they may merely be ‘cute’ or a sign of facial distinction much like a well placed mole. The location of a cheek dimple varies on different faces. It has been described as being located at the intersection of a horizontal line drawn out from the corner of the mouth and a vertical line dropped down from the corner of the eye. (lateral canthus) While that may be true for some people, dimples can also frequently be seen superior to that point.

The anatomy of a cheek dimple has been studied and has been found to be an anomaly of the underlying muscles The zygomaticus major muscle originates on the zygomatic (cheek) bone and runs down to insert into the corner of the mouth. It is a major elevator of the lip, particularly the corner of the mouth. Cheek dimples occur because there is a natural split or bifidity of the muscle as it heads downward into the lip. When the muscle contracts and the lip lifts, this split in the muscle pulls the overlying skin downward into the muscle defect much like an inward hernia. This creates the classic indentation on the cheek that either appears or is magnified on smiling.

The making of a cheek dimple (dimpleplasty) is a fairly simple procedure and has been traditionally described as a coring or soft tissue excision technique. Done from inside the mouth, a core of tissue is removed from the mucosa outward to the underside of the skin where the dimple is desired. A suture is placed from the dermis of the skin down to the mucosa where it is tied, thus pulling down the skin. While this can look effective when doing the procedure, I find that its results are very inconsistent. Dimples often don’t persist as it heals or asymmetry develops when cheek dimples are created on both sides. Some report problems, such as suture granulomas or even injury to the buccal branch of the facial nerve, neither of which I have seen.

Any cheek dimple technique is intended to partially create what occurs in natural dimples, a defect in the muscle. The adherence or scarring of the underside of the skin down to the muscular defect is not what occurs naturally but is necessary to create the dimple effect. That is why all surgically created dimples will appear at some depth even when not smiling. 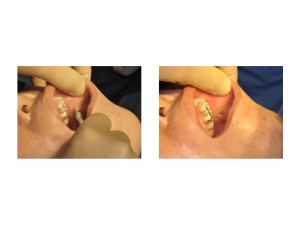 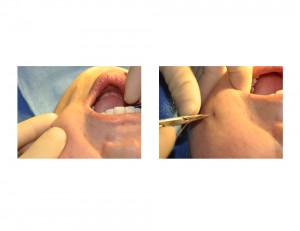 Creating this muscular adhesion is the key to surgical cheek dimpleplasty. While blind coring or cautery tissue excision creates a soft tissue defect, that does not always ensure that the skin will scar down to the muscle despite a pull down suture. An alternative and superior approach is to sew the muscle proper to the skin without any soft tissue excision. This is done by identifying the intervening muscle between the mucosa and the skin and isolating a strip of it. In theory this should be the zygomaticus muscle but the buccinators muscle will do as well. The muscle is transected and the superior end of it is then directly sewn to the underside of the skin. Thus when the muscle contracts the outer skin is pulled inward. This will also lessen the unnatural inward dimple that can occur when a coring technique is used.

While the recovery after cheek dimpleplasty involves no specific accommodations, it does take time to see the final result. It will take four to six weeks for the swelling and complete scarring and muscle adherence  to take place to see the final outcome. The stability of a surgical-created cheek dimple awaits for three months after the procedure.