Fat grafting preceded by liposuction harvest is a cosmetic and reconstructive plastic surgery procedure that is here to stay. Despite the ease of fat availability in most people and the ability to virtually put it anywhere by injection, it is plagued by two as yet unsolved problems. It survival is, at best, unpredictable and the many regenerative capabilities given to it is largely unsubstantiated although well anectodally documented.

Many of the benefits given to fat grafting is credited to its stem cell content although the number and true functions of them remain unclear. Many have conjectured and even tried to supplement fat with additional stem cells but the benefits of this combination in humans have not been substantiated…until now.

In the September 28 issue of the Lancet in a special issue dedicated to surgery, an article entitled ‘Enrichment of Autologous Fat Grafts with Ex-Vivo Expanded Adipose Tissue-Derived Stem Cells for Graft Survival: A Randomized Placebo-Controlled Trial’. In this unprecedented study, the results of a triple-blind, placebo-controlled trial compared the survival of fat grafts enriched with autologous adipose-derived stem cells (ASCs) versus non-enriched fat grafts. Using patients who had liposuction harvests two weeks apart, one for ASC isolation and another for fat graft preparation, 30ml fat injections were done in each upper arm. One graft was enriched with ASCs (20 × 106 cells per mL fat), and another graft without ASC enrichment served as a control. Injected fat volumes were measured by MRI immediately after injection and four months later. 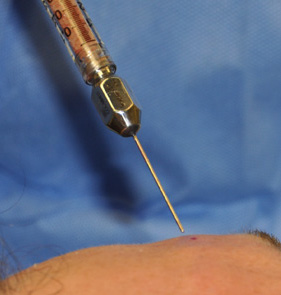 Their findings showed that the grafts that were enriched with fat-derived stem cells retained 81% of their volume compared to the standard grafts that retained just 16% of their volume. Four months later, stem cell grafts also demonstrated higher amounts of adipose tissue and newly formed connective tissues. Moreover, there was less necrosis in the stem-cell-enriched fat grafts compared to the standard grafts. (which is also why there were higher retained volumes)

This study confirms what many have suspected and even espoused, that adding stem cells to fat grafts improves their survival. At the very least it improves fat grafting reliability and may even render greater regenerative properties to them. However, such stem cell supplements is not currently allowed for human use in the U.S. under FDA regulations. It is not permitted to harvest stem cells, grown them in cell culture and then return them for implantation to a patient unless done as part of an FDA-approved clinical study. These results also do not necessarily relate to some current devices that isolate stem cells from fat for immediate re-implantation as that is not really supplementing or ‘supercharging’  the fat graft.

One alternative option to supplementing fat grafts is with platelet-rich plasma (PRP), which can be done concurrently with fat grafting, but whether this produces a similar effect to stem cells or has any positive effect at all remains theoretical.