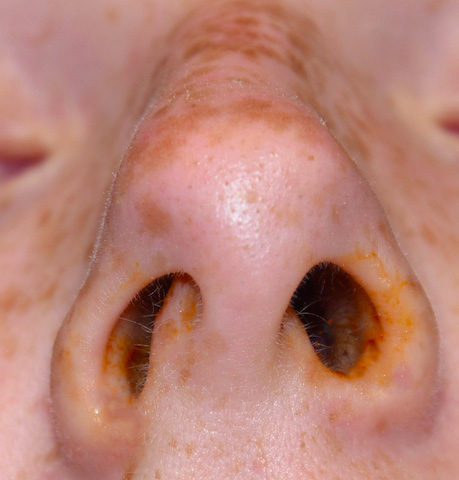 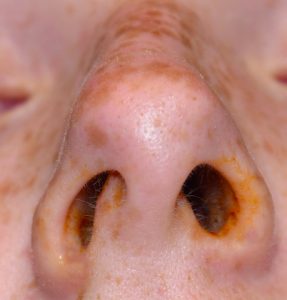 While many deviated septums are not that apparent externally if it is located back into the nose, some septal deviations are more easily seen. These occur when the deviation involves the front end of the septum which lies just behind the columella. (caudal septum) This is when the patient sees a bulge sticking into one of the nostrils. This protrusion is the end of the septum that is not where it is supposed to be….in the midline. This not only causes a change in the size of the affected nostril but often causes a twist in the columella as well. 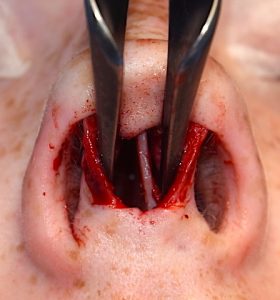 During an open rhinoplasty direct access can be made to the deviated end of the septum. In some cases it is only the end of the septum that needs to be relocated back to the midline. But in other cases the deviation comes further back and this must be corrected as well. 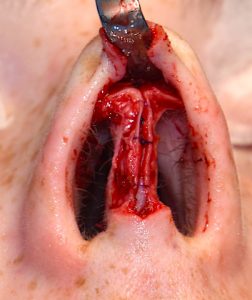 To support further tip reshaping surgery cartilage grafts can be harvested and used to create a columellar strut graft. This not only helps to support the tip cartilage changes but can also be attached to the repositioned midline septum to help support its position.

Getting the end of the septum back into the midline during an open rhinoplasty gets rid of the nostril bulge for the obvious reason and one not so obvious reason. It also allows the displaced medial footplate of the lower alar cartilage which has been pushed by the deviated septum into the nostril to resume its more natural near midline position along the side of the columella.